Westport’s old-timers have fond memories of a now forgotten tradition of May baskets. These hand-made paper or cardboard baskets, filled with small treats and trinkets, were hung on a neighbor’s door as a gift. It was a May time tradition that celebrated life in a close-knit community, neighborly familiarity and friendship, as well as the changing seasons.

The tradition of May baskets was common in New England rural communities during the 19th and early 20th centuries. In some communities, it was limited to a one-day event to mark May 1, but here in Westport the activity continued for the entire month.

The creation of the baskets was a social activity undertaken by children. Milton Borden recalled: “We had May Basket parties a lot when I was small. One night, we had twenty-one May Baskets.”

May baskets were constructed from paper or cardboard or shoeboxes, sometimes with “woven” paper or shaped into a cone. A visually appealing basket was key, requiring decorations such as brightly colored tissue paper, frilly crepe paper, streamers, ribbons, paper flowers or real flowers such as violets. Basket contents included nuts, candy, fruit, berries, woodland or garden flowers, and perfume.

The real excitement and fun of the May basket came in the hanging as well as the making. Taking place at dusk, it was a thrilling game for children, similar to hide and seek. The first challenge was to approach the house of the selected basket recipient, undetected. Children then proceeded to hang the basket, knock on the door and then run for dear life. Marianna Macomber admitted that “half the fun was hiding, being chased and caught.” The goal was “not to get away, no one wanted to get away but to hide and at last to be caught and then to go in for the neighborly good time to see the May basket and its contents admired.” 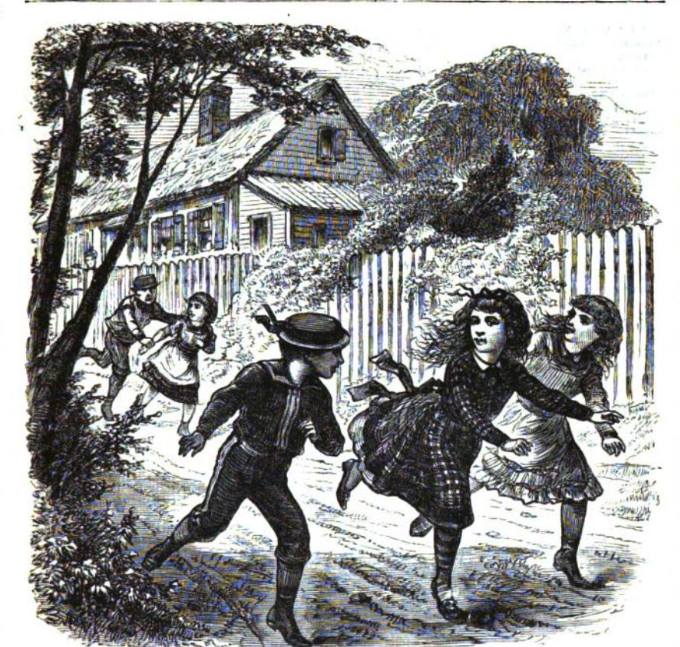 “How noiselessly we hung the precious basket upon the door and then with might and main pounded upon the panels the true May basket warning and ran for dear life. Not to get away, no one wanted to get away but to hide and at last to be caught and then to go in for the neighborly good time.” Frank Leslie’s Pleasant Hours, 1879.

Not everyone received pleasant May baskets. As Carlton Manchester noted: “There were others who received May baskets, but not such nice ones.” He described the practice of leaving dead snakes or rats on the step of a less favored neighbor. By tying a piece of rope to the dead carcass, mischievous children were able to pull the snake or rat along the ground as a nasty surprise when the owner opened their door. An equally distasteful prank by Carlton Manchester and his sister involved filling a May basket with manure: “Hung by the door in the proper tradition, it was picked up and taken into the house.”  According to Manchester the recipient “came to have a beautiful flower garden.”

Such pranks were generally received with good humor as recounted by Carlton Manchester: “Three elderly sisters lived close by us (at Westport Point). They usually had a rat left on their step, but they played along. They always let out a scream and lambasted the rat with a broom. Later we left a beautiful bouquet of wildflowers. They put them in water by the window. We saw them there until the last one died. They were the best of neighbors”

The disappearance of such a simple yet generous act of kindness is not surprising. The realities of our 21st-century lifestyle have placed significant obstacles in the way of a May basket revival. Sandwiched in between Easter and Mother’s Day, there is little time for this custom to have its own place in our calendar of annual festivities and yet another “gift giving” event, however humble, may not be welcomed by everyone.

The nature of our community has also changed. Fears for safety, and concerns for security and privacy are potent deterrents of informal, uninvited interaction in neighborhoods. Do we even know our neighbors or feel fondly connected to them? Is it acceptable for children to roam the neighborhood unsupervised, and to knock on a neighbor’s door, especially that of an older person? Furthermore, the homemade / handmade / inexpensive nature of the May basket may not meet our sophisticated expectations of gift-giving and receiving.

Perhaps it is fortunate that the concept of May baskets has faded away, never to be successfully marketed commercially. Harkening back to a more innocent era of a closely-knit Westport community, Borden suggested that the concept of May baskets had very specific motivations: “Then, they had June boxes, but that didn’t go over too big. If you’d belong to the Grange, the box would go to the highest bidder. The May Baskets you would make; they were for your friends.”

Do you carry on the May basket tradition? Let us know or send us a photo of your May basket. 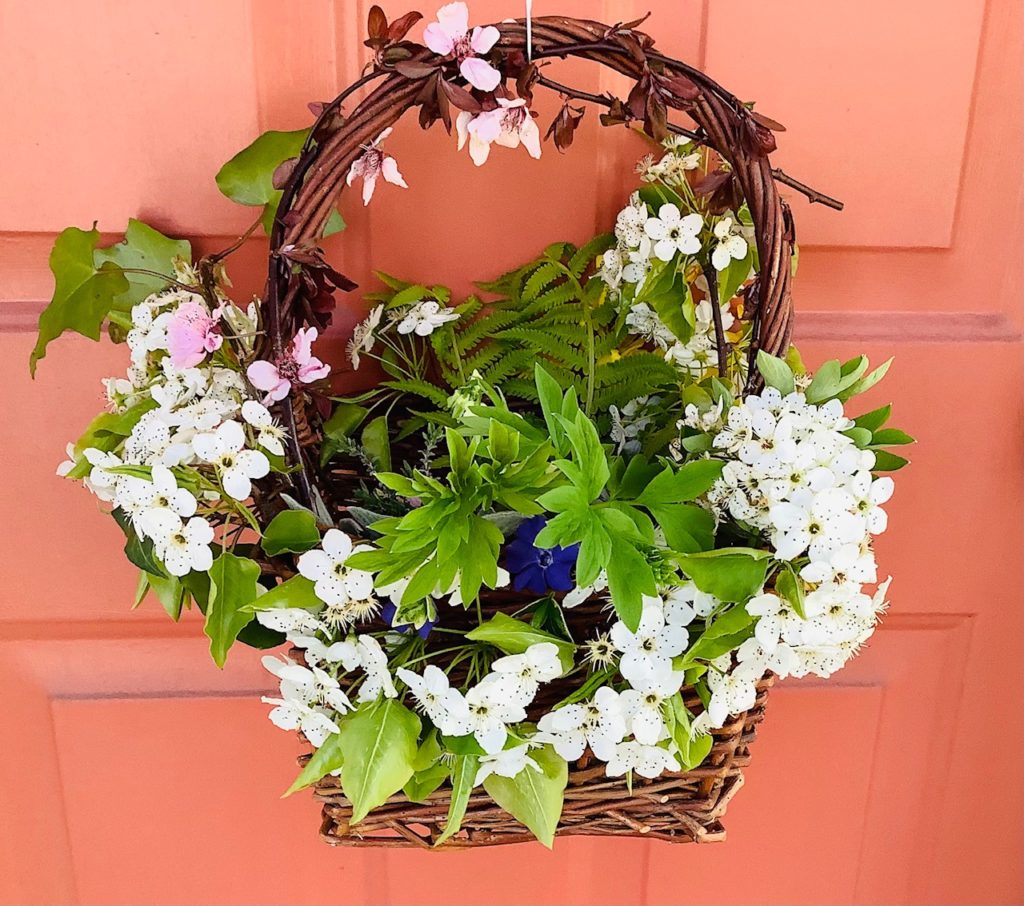 A foraged May basket – a modern-day version of the traditional May basket. Be creative and make your own version!

As I am writing now in May, May baskets come to mind. In our locality May baskets were not only hung the first day of May but continued all through the month if one’s money held out and the baskets were made small. They might be group affairs which lessened the expenditure of the individual. Half the fun was hiding, being chased and caught, and the last part which was always going inside to help eat the contents of the baskets. Our pastures produced quantities of violets for decoration.

The Macomber Family of Central Village

We had May Basket parties a lot when I was small. One night, we had twenty-one May Baskets. They put fruit and candy and all kinds of stuff in them. They’d bring them to your doorstep

and then run away. It was sort of like hide and seek. It was done all through May. Then, they had June boxes, but that didn’t go over too big. If you’d belong to the Grange, the box would go to the highest bidder. The May Baskets you would make; they were for your friends.