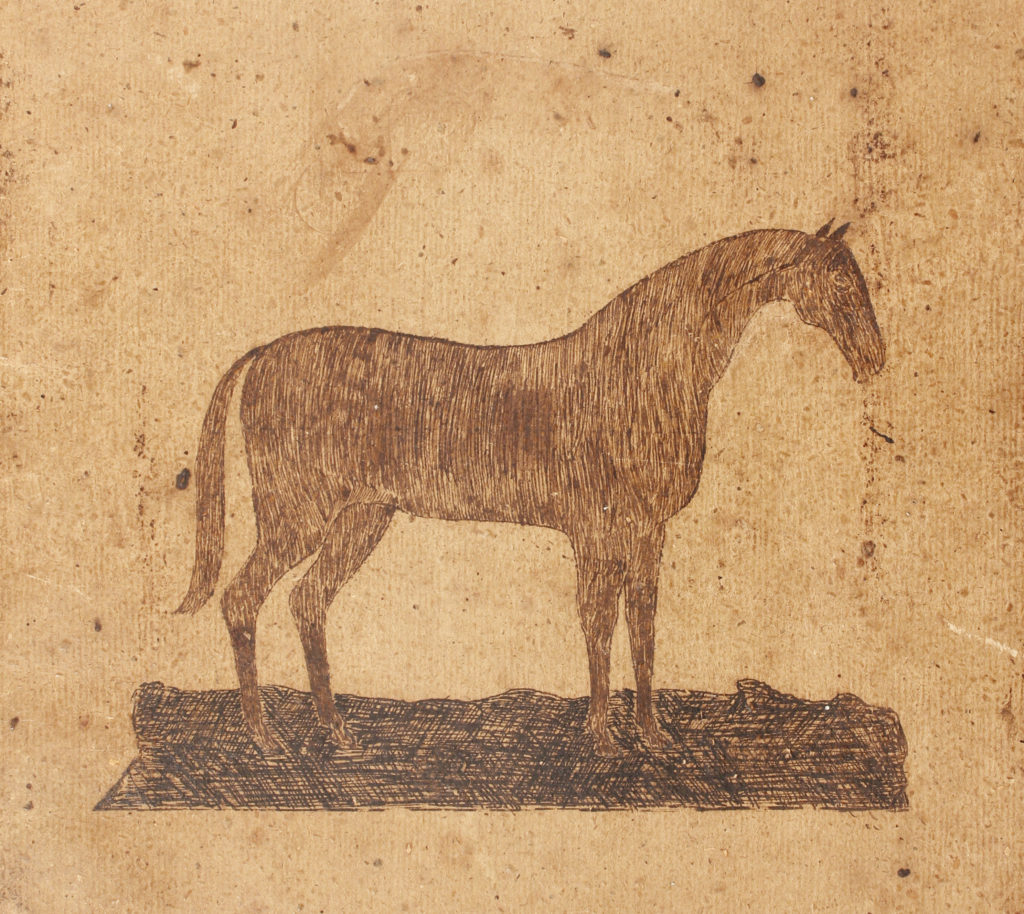 Drawn by Frederick Allen “Tuesday, June 21 1836 Rainy ◄ NE. AM went to H. Pero’s. Afternoon made that image of a horse on this book.”

By a fortuitous chain of events, an old journal returned to Westport, Massachusetts.  It is the journal of Frederick Allen (1819-1874), who apparently lived his whole life on Hixbridge Road, where the Buzzard’s Bay Brewery is today.  For 59 months from early June 1833 through the end of April 1838 he kept a journal almost daily.  For the first 47 of those months he lived the life of a young, unmarried Westport farmer and recorded the wind and weather and his various activities of work and play.  For the last 12 months of the journal he shipped out of Westport Point and went a-whaling and recorded his trip around the Atlantic Ocean.  The last entry in his journal is the day he returned to Westport.

The journal came back to Westport via Richard Donnelly, an antiquarian from Barrington, Rhode Island who specializes in whaling journals, among other things.   He bought the journal about a decade ago, studied it intensely, and gave a presentation on it to the Westport Historical Society (WHS) in 2015, which is still available on YouTube: https://youtu.be/q6jrYv1CbG8.  In his talk he discussed Frederick’s life in Westport as a young man, the chores he undertook on his father’s farm, the various religious meetings he attended, and his socializing with both young men and women, usually in the evening.  But something appeared to be missing in his life – adventure.  So, what option did a young Westport farmer have?  That’s where the whaling came in, and Mr. Donnelly discussed that in detail.

In 1835, Frederick’s father Major Allen decided to build a new house.  He had a family of four, with his wife Molly, his daughter Charlotte, and son Frederick, and must have thought the family needed more space.  Thus, Major Allen tore down their existing house that had been built in 1709 and contracted with his brother John Allen for the new construction.  Frederick was actively involved, lending his father money for the building and actually helping to build it.  The finished house was in fine Georgian style and existed at its Hix bridge Road site until very recent memory, when it was lovingly dismantled piece by piece by Dora & Tripp Milliken of Westport and re-assembled on their property off Main Road.  The Milliken’s also bought the journal from Mr. Donnelly and own it to this day.

As referred to above, Frederick’s journal covers about four years of farming and about one year of whaling.  It was the whaling that has attracted the most interest to date.  However, the WHS’ Executive Director Jenny O’Neill notes that there are plenty of whaling journals around but very little on Westport farming in the 1830’s.  For that reason, we want to focus first and foremost on Frederick’s life as a young farmer.

You can download a copy of the journal here.

Frederick Allen – tall.  Frederick was a 19th century Westport farmer who went whaling.  As far as we know, he lived his whole life at 98 Horseneck Road in Westport, Massachusetts, except while whaling. According to his Protection Papers that he took out just before his whaling adventure, Frederick was 6’2½” tall with brown hair, dark complexion and dark eyes.

His Journal – almost five years.  Frederick wrote a Journal that covered his daily activities for about 59 months from June 5, 1833 to April 29, 1838.  He led the life of a Westport farmer from the beginning of the Journal until April 21, 1837 when he shipped out.  The last entry was the day he returned to Westport from whaling.

Farm work – hard but fruitful.  The Allen family farm grew a variety of crops, including corn, potatoes, turnips, cabbages, pumpkins, oats and hay, and Frederick worked hard on the farm.  His father kept livestock, including hogs and sheep, and had oxen that they probably used for plowing.  Frederick also gathered apples and made cider. He dragged stones to make walls and worked on farm roads.  He cut and drawed wood for fuel.  He owned a sail boat and took advantage of Westport’s bountiful waters by catching a lot of fish with his nets and hooks.

Family house – Hixbridge Road.  In 1835 Major Allen built a new house on the family property at 98 Horseneck Road in Westport, replacing a 109-year old house.  The 1858 Westport map shows it belonging to “M. Allen”, which we can safely assume was Major Allen.  The 1871 map says “F. Allen”, who was certainly Frederick Allen.  The 1895 map says “H. Allen”, Frederick’s widow Hannah.  The house was carefully dismantled piece by piece c. 2012 and relocated to Main Road in Westport and reassembled by Dora & Tripp Milliken.  It serves as their home to this day.

Socializing – evening parties.  As a young, unmarried man, Frederick did a lot of socializing with young men and women in his neighborhood.  He described many of these evening gatherings as “sprees”, perhaps implying that adult beverages were involved.  He never mentioned his eventual wife as attending these gatherings; however, he wrote that he posted a letter to “H.C.B.” (almost certainly Hannah C. Brownell) while on his whaling voyage, and he probably knew her from his social activities.

Henry Pero – man of color.  Frederick made numerous references to “H.P.”  This was Henry Pero, a man of color born in 1816.  As a baby and young child, he was cared for by Charlotte White, who was paid by the Town to do so.  Frederick hired him, fished with him, shot targets with him, but made no mention of socializing with him in the evenings.

Dr. Handy – of Handy House fame.  Frederick lived not far from the Handy House and visited Dr. Handy when he got sick, for example with a strep throat.  He also ordered a thermometer through the doctor and used it to record temperatures in Fahrenheit in his Journal.

Religion – believer.  Frederick was religious and attended frequent talks by a variety of ministers at numerous locations.  These meetings were usually not in churches (i.e. in a barn) and usually in the evening.  He seems to have been a Christian but did not belong to one church.  He went to a baptism of two ladies in the cold waters of the Westport River by a bridge (probably nearby Hixbridge) in January.

Reading – many books.  Frederick was quite literate and along with his excellent handwriting he was an avid reader.   In the earlier years of his Journal he read such works as the Working Men’s Prefs., Vol. 2, No. 1, Daboll’s Arithmatic and a geography book.  However, later in the Journal period with whaling increasingly on his mind as he acquired Moore’s Practical Navigator and Bowditch’s Navigator.

Whaling – adventure of a lifetime.  Frederick shipped out on the brig “Mexico” from Westport Point on April 21, 1837.  The owner and captain of the ship was Gideon Davis of Westport Point.  He first sailed south to the Bahamas, then east across the Atlantic to the Azores, the Canaries, and Cape Verd, then southwest back across the Atlantic below the equator to the Abrahlos Banks off Brazil, then north to the Caribbean, and then back home to Westport.  The voyage lasted one year and 11 days.  It produced 555 bbls. of sperm oil and 20 bbls. of whale oil.  Frederick’s share of the voyage’s revenues was every 65th barrel.

Burial – Westport.  Frederick is buried in Beech Grove Cemetery, Westport and he rests in Section C1, Lot 103.  Along with Frederick in the same section of the cemetery are the graves of other Allen family members, including his parents, his wife Hannah, and his children Cortez, Charlotte, and Mollie.

Comments on the Frederick Allen diary with a collection of related tales.