The lands of Old Dartmouth, purchased on behalf of the Plymouth Colony in 1652, included all or part of the present towns of Dartmouth, New Bedford, Westport, Fairhaven, and Acushnet, Massachusetts, and a strip of Tiverton and Little Compton, Rhode Island. John Cooke and Edward Winslow, serving as representatives of the Colony, bought the land from the Wampanoag Chief Sachem Massasoit and his son, Wamsutta, in consideration of “thirty yards of cloth, eight moose-skins, fifteen axes, fifteen hoes, fifteen pairs of breeches, eight blankets, two kettles, one clock, two pounds in wampum, eight pair stockings, eight pair shoes, one iron pot, and ten shillings.”

The enormous parcel was divided among 36 proprietors (including William Bradford and Miles Standish) with each individual acquiring at least 800 acres of land. Some of the stone markers designating these plots are still present within the town. As with many Native/colonist land transactions brokered in New England during the seventeenth century, the properties were not immediately settled. Most of the first purchasers remained absentee owners and sold off their parcels after the Plymouth authorities began taxing the lands. Only three of the original proprietors are believed to have settled in the area.

Several factors may have induced Euro-American settlement in the Westport area by the 1650s. The Plymouth and Massachusetts Bay colonies began persecuting religious dissidents during this period, and as a result many sought lands at a greater distance from the seat of colonial government. Many of the first residents of Old Dartmouth conformed to the Quaker (Society of Friends) religious doctrine and were not affiliated with the church or government of the old Plymouth Colony of Massachusetts. They chose to settle in the fertile agricultural lands and coastal areas of Old Dartmouth where they “. . . would be free to worship according to the dictates of their conscience.”

A second settlement incentive was Old Dartmouth’s abundance of rich farmland, navigable waterways, and protected harbors. The urban villages of New England were becoming overcrowded by the mid-seventeenth century, pushing families into the hinterlands in search of more promising agrarian and commercial opportunities.

Because of concerns about conflict with Native groups, early English settlement was clustered at the highly defensible locations of Horseneck Beach and Westport Point and, before King Philip’s War (1675), included only an estimated 30 homes. Family names associated with the early Euro-American settlement of Westport include Earle, Macomber, Ricketson, Sherman, Sisson, Sowle, Tripp, Waite, and Wilcox. Richard Sisson is documented as one of the first residents, with a pre-1676 homestead located on Drift Road at the Head of Westport (Maiocco 1995; WHC 1987). Sisson’s original home was reportedly burned during King Philip’s War and was rebuilt in the general location of the Town Landing (WHC 1987). Daniel Wilcox, a Portsmouth, Rhode Island resident, is recorded as another initial Westport settler who purchased land in 1659 along the East Branch. During this early period, Wilcox appears to have bought and sold large tracts of land along both branches of the river.

Documentation of specific homesteads and settlement locations is extremely limited for this period. Westport’s early Euro-American settlers within the present-day town appear to have selected the coastal margins and rivers as primary homesteads. Initial settlement was also closely tied to waterpower, leading to the early settlement of the Head of Westport section of town. Interior lands located away from the Westport River and northern portions of Westport remained largely unsettled prior to King Philip’s War, although Native networks, already well traveled, were likely used by the first Euro-American settlers as well.

The beginning of this period is marked by the events of King Philip’s War (1675–1676), and Old Dartmouth played a major role in the conflict that extended across much of southern New England. The somewhat clustered settlement at the Head of Apponagansett Bay and Russell’s Garrison (DAR-HA-3) in present-day Dartmouth were a focal point for some of the reported hostilities. The Native population in Westport undoubtedly declined following the war, and some of the indigenous residents were apparently sold into slavery in the West Indies (Old Dartmouth Historical Society, cited in MHC 1981:4).

After King Philip’s War, Euro-American settlement in the Westport area increased rapidly and families began to fan from the previous concentration along the coastline. During this period, the Head of Westport developed from a single residence to a land and sea route crossroads community. Additional farmsteads were scattered along the major Indian trails, which were improved as travel routes to connect growing community clusters at the Head, Hix Bridge and Westport Point. 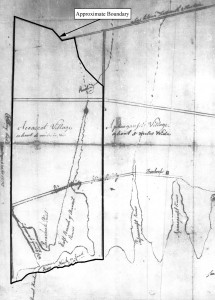 The topography of the Old Dartmouth land grants, including broad expanses of fertile farmland separated by ponds, rivers, and small inlets, encouraged a decentralized settlement pattern and established the Westport area as a primarily agrarian community. Historian Henry Worth’s reconstruction of Old Dartmouth settlement between 1658 and 1758 indicates that homesteads in Westport were widely separated across the southern half of town rather than tightly gathered into one small village (WHC 1987:16).

A number of early industrial ventures were established at the Head of Westport, capitalizing on the impressive 40-ft drop along the Noquochoke River (WHC 1987:3). Reed Road may have been constructed during this period to provide access to the mills located northeast of the Head (MHC 1981a). The earliest of these mills may have been located along the East Branch and initiated by George Lawton, Benjamin Waite, and John Tripp. This enterprise, established around 1712, was known throughout its history by each of the developer’s names and later in the historic period as Chase’s Mill (Hutt 1924). The increased commercial activity at the Head of Westport necessitated improved passage between the eastern and western sides of the town. Transport via the Hix ferry in the first decade of the eighteenth century, and the Hix Bridge after 1738 improved the route between Little Compton and New Bedford (Hutt 1924; MHC 1981a).

ntral Village, where the town’s first Quaker meetinghouse was built prior to 1761. A second meetinghouse (circa 1761) was built near the junction of Old County Road and Main Road and provides evidence of a growing Quaker population in Westport (MHC 1981a).

The growth rate of Westport, especially after the first quarter of the eighteenth century, can be estimated by using available population figures from this period. A total of 432 persons were listed as Old Dartmouth residents in 1688, while the recorded population in 1765 had risen to 4,506 residents (Gifun 1983:4; MHC 1981a). The tremendous increase in settlement in the Dartmouth area was certainly reflected in Westport as well, where abundant natural resources and a developing road network facilitated human activity.