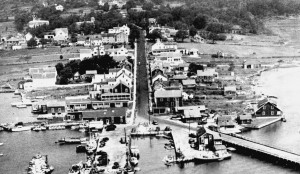 The protected harbor, broad expanses of fertile farmland, and rich fresh water and estuarine resource base was a strong incentive to the earliest Euro-American settlers. For many of the same reasons, the area also was likely a core of Contact period Native American use.

Land evidence records indicate that Native Americans occupied the area known as Acoaxet in the late seventeenth century. In 1700 Jonotus, Sam Parachus and Sue Codomoch, identified as “Indians of Little Compton,” sold a 300-acre parcel around Cockeast Pond to colonists William Southworth and John Rogers. The property description included a boundary “partly by the lands of Isaac, an Indian preacher, now deceased” and an area that was “formerly the land of Peter Quashim” and included “a parcel of meadowland formerly sold by Mannuah” (cited in Tripp n.d.:17–18). This description suggests that Christian Native Americans occupied the area around Acoaxet, and that there may have been a Native community in this part of Westport.

Native inhabitants knew the Point as Paquachock and Horseneck Beach may come from its Algonquin designation, Hassanegk. According to one historical source, the word Hassanegk means “a house made of stone,” and that such a feature existed around the turn of the century near the western end of Horseneck Beach. The structure is described as an “old stone cellar, probably an excavation made in the hill side, lined with field stone and roofed over” (Hall and Sowle 1914:9). While some accounts suggest that the beach was named for its resemblance to the shape of a horse’s head, the authors suggest the connection with the stone structure. Whether this feature was associated with Native or early Euro-American activity on the coast is unclear. The exact location of this feature is also unknown. It is highly probable that although it was visible in the early part of the twentieth century, coastal storms including the Hurricane of 1938 may well have destroyed all or part of the structure.

The Point area was settled and laid out as farms by the early 1700s, primarily by the Gifford and Macomber families. The prime harbor location of the town quickly resulted in the development of Main Road along what was likely a pre-existing Native American trail, and led to the construction of a landing and ferry in 1712. Wharves and maritime activities were concentrated on the common lands of the Point and Horseneck throughout most of the eighteenth century. One of the earliest buildings on the wharf was completed around 1740 on what was then the estate of William Howland. Portions of this building remain in use today as a fish market (Maiocco 1995:44). 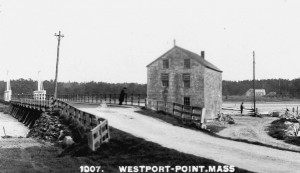 Early residents made use of the nearby protected islands on the Westport River for farming and pasture. Extant records for Linniken Island, located north of the Horseneck dunes, indicate that these resources were actively used by local residents during the eighteenth century. Town residents also used Gooseberry Neck and the entire Horseneck peninsula for pasture long before summer tourism came to Westport (N. Judson, personal communication 2003) (see Chapter 5).

During the Revolution, small privateer vessels used Westport Harbor as a base of operations . The complicated network of sandbars and islands made it all but impossible for anyone but an experienced local pilot to navigate the harbor and, once in the harbor, American vessels were easily masked by the high dunes of Horseneck Beach. This combination of factors did not completely shield the Point from British attack, but it did discourage the military from landing troops in the area.

Members of the Macomber family, one of the founding families of Westport, were farmers in this portion of town. A family settlement core developed at Macombers Corner at the intersection of Sodom and Adamsville roads in addition to a primary farm on Main Road at Westport Point (N. Judson, personal communication 2003). One of the family’s notable contributions to agriculture was the development of the Macomber turnip, a variety that was whiter and sweeter than the yellow turnip (Smith et al. 1976). Other eighteenth- and nineteenth-century farms located in this section of town produced dairy and agricultural products that were initially distributed locally and moved greater distances as transportation networks improved. Several mid-nineteenth century cranberry operations were also present in the Horseneck Beach area. 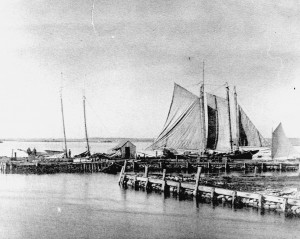 Fishing, whaling, and coastal trading dominated the economy of Westport from 1770 to 1870, and promoted the growth of related industries at the Point. The earliest commercial use of the harbor was likely associated with the codfish industry. Large drying platforms were erected on the docks to process fish collected between Nantucket and Newfoundland. Saltworks located on the east side of the Point utilized a complex of pipes, evaporation vats, and sheds to process seawater. Several windmills were located at the southeastern end of the Point and helped pump water from the harbor into the processing tanks. Whaling became the main focus of the Point in the mid-nineteenth century, with as many as 20 or 30 vessels at a time working out of the harbor (Hall and Sowle 1914:37).

Once whaling began to catch on in the early nineteenth century, activity at the point became even more focused around the wharves. In 1829, Isaac Palmer operated a store, sail loft, and tavern at the Point. Other improvements during this period included Lees Wharf, constructed about 1800 by the Mayhew family and enlarged in 1830; Almy’s Wharf, built by one of the oldest and most prominent families in Westport, and; Cory’s Wharf, built by the Davis family and sold to Isaac Cory in 1806. The Paquachuck Inn at the Point also dates to the period of Westport’s whaling heyday (Maiocco 1995:45). 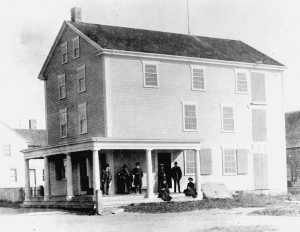 At least one shipyard operated at the Point during the nineteenth century. Frank Sisson and Eli Allen built the Kate Cory for A.H. Cory at a shipyard east of the town landing. This vessel was later turned into a brig and was burned off the coast of Africa by the Alabama (N. Judson, personal communication 2003). This yard also produced the whaleship Mermaid for Westporter Andrew Hicks. Other ships used previously for fishing were re-outfitted for use in the whaling industry. The Amy and Paul was one of these vessels, and sailed for the whaling grounds around 1825 (Hall and Sowle 1914:27).

As whaling began to dominate the economy of Westport Point during the early nineteenth century, the Cory family capitalized on the lucrative market by establishing a store that served as a supply storage post, Custom House, post office, and retail outlet for sailors and residents. Other prominent merchant and sailing families of this time include the Mayhew, Davis, and Hicks clans. The Thomas Mayhew House (ca. 1827), located at 2018 Main Road, is a Federal style structure representative of the wealth and power enjoyed by these early-nineteenth-century commercial barons.

In the wake of this booming commercial economy, more residential structures were constructed. 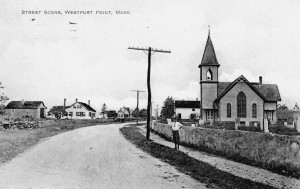 The Westport Point cemetery was established ca. 1810 in response to this increasing population. Originally the property of the town and loosely associated with neighboring Methodist Church, it holds the remains of several of the Point’s most prominent eighteenth- and nineteenth-century families and also includes excellent examples of nineteenth-century masonry funeral art. A stage line was established in 1840 between the Point and New Bedford and operated for 60 years, providing easier passage for the increasingly affluent Westport Point residents to the urban hub to the east (Hall and Sowle 1914).