This section of Westport developed as its own historic community near the intersection of Horseneck, Pine Hill, and Hix Bridge roads (Maiocco 1995). The development of the Hix ferry, and later the Hix Bridge, was instrumental to the development of this portion of Westport as it provided the easiest and narrowest point of passage across the river between Drift and Horseneck roads, both of which lay along the route of pre-existing Native American trails. 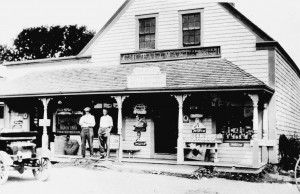 The community center located at the road intersection is largely gone, but remnants of the circa 1865 South Westport general store and post office are still visible on the north side of Hix Bridge Road. The store served as a stop on the Little Compton-to-New Bedford stage line in the nineteenth and early twentieth centuries. The closing of the South Westport post office in the mid-1960s appears to have been the end of the community center at this location (Maiocco 1995). More than 30 historic properties in South Westport have been designated as part of a National Register area (MHC files). The earliest settlement of the Hix Bridge area occurred before 1700, based on deeds researched by historian Henry Worth. Early property owners along the Contact Period highway (present-day Hix Bridge Road) included Valentine Huddlestone, Samuel Cornell, and Joseph Coleman (Worth 1934). A large farm located on the north side of the highway was owned by Peleg Slocum, followed by William Ricketson, and George Cadman. Cadman owned the farm between 1686 and 1718 (Worth 1934). This property eventually became known as the Handy Farm. 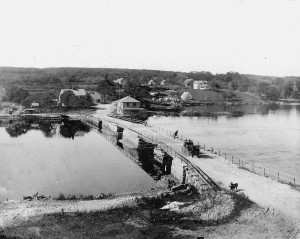 The earliest reference to a ferry at the site appears to date to 1707, when the roadway was described as beginning “where the ferryboat now usually lands” (Worth 1934). George Cadman conveyed his property to Mary Hix in 1710 at which time she established her home and a ferry landing. Court records indicate that Mary Hix was issued a license to sell liquor, suggesting that she operated an inn or tavern along with the ferry (Worth 1934). Her son, William, bought the property in 1735 and promptly began construction on a toll bridge, completed in 1738. The bridge became a source of contention in town, however, when the Head of Westport mill owner George Lawton, among others, protested to the General Court the structure as a nuisance in that it obstructed the passage of boats up and down the river. Hix’s position as a General Court representative between 1739 and 1749 ensured that the suit went nowhere (Worth 1934). When ships were launched from the Head, or needed to pass north of Hix Bridge, teams of oxen were utilized to drag the boat up across the landing, around the bridge, and back into the river on the other side. Reportedly, the Hix house itself was built on a moveable skid that allowed oxen to pull the building aside when wider ships needed to be portaged (WHC 1987:28). Throughout the late nineteenth century, a stone landing just south of the bridge known as Tripp’s Wharf was used to ship off much of South Westport’s farm produce (Maiocco 1995:36). The existing bridge was destroyed by the 1938 Hurricane and replaced by a cement bridge in 1939 (Maiocco 1995:39). As transportation corridors expanded through Westport, the Hix Bridge area served as part of the stage route from New Bedford to Tiverton. Between 1842 and 1845, carriages ran from Westport Point to Hix Bridge six days a week to connect with the stage, delivering mail and other materials to and from the Point’s residents (Tripp n.d.:112). John Avery Parker and his brother-in-law Levi Standish reportedly built several vessels near Hix Bridge between 1790 and 1792. Parker later moved to New Bedford and had another 15 ships built in Westport, although none were constructed at the Head. 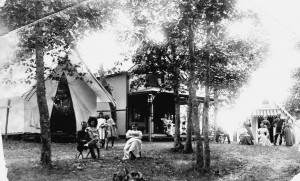 In 1873, the Union Sunday School Association was established by several local churches, who appointed delegates to meet together at regular intervals. At a meeting in 1878, the delegates discussed the possibility of holding a four-day outdoor meeting and a committee was formed to select a location. Allen’s Grove (subsequently known as Cadman’s Neck, after an eighteenth century owner) was chosen and the first meeting was held in August 1878. Refreshments were supplied and families were able to rent tents for the entire meeting (Tripp n.d.:139). This type of gathering became known on the East Coast as the “camp meeting” because participants would spend several days at the revival living out of tents set up on the grounds. After the initial success, the Westport Camp Meeting Association was formed and the revival became an annual event. By 1892, 6,000 people attended the main Sunday meeting and small cottages replaced the canvas tents (Maiocco 1995:37). The annual summer meetings continued until the 1940s, when interest began to fade and the cottage occupants were more frequently wealthy New Bedford vacationers (N. Judson, personal communication 2003; Maiocco 1995). Examples of historic standing structures are located in this geopolitical zone as they are in every other section of Westport. One of the more prominent is the Handy House, built in stages beginning in the early eighteenth century. 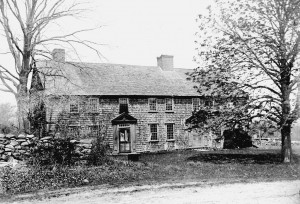 Worth (1934) suggests that the first occupants were William White and his wife Elizabeth Cadman, who built the house around 1714. Local historical sources report that the home was actually constructed by George Cadman in 1714 (Maiocco 1995). The central portion of the home was reportedly built around 1800 by Dr. Eli Handy, and the west section was added last by Eli’s son James (Worth 1934). This large structure, still standing at the intersection of Hix Bridge and Drift roads, has been continuously occupied over this period and has undergone renovations, expansions, and remodeling. Like other historic homes, evidence of former structural foundations, outbuildings, and orchards and gardens along with privies and trash dumps could be expected in the yard areas surrounding this home. The National Register-listed Paul Cuffe Farm is located near the southern edge of this zone, at 1504 Drift Road (Greenlee 1973). The property at this address was also designated a National Historic Landmark, despite the fact that there is still some uncertainty among the town’s historians as to the exact location of Cuffe’s homestead and boatyard. Buried archaeological deposits that may be located within this property present a unique opportunity to help identify the sequence of occupation at the site and may be able to help answer questions about where Cuffe actually lived. This area also contained several of Westport’s historic farms, located along the eastern bank of the East Branch. One of these was established in the 1880s by Scottish immigrant John Smith and became known as the Long Acre Farm. The farm produced prized potatoes and turnips in addition to cattle. In 1940, the farm was awarded a medal by the Commonwealth for growing a record crop of 613 bushels of potatoes per acre (Adams et al. 2001). After many decades of productivity by successive generations of the family, the land was finally sold and converted into the Westport Vineyards. The Boan’s Hollow Farm was located across the road and was settled by Scottish immigrant Joseph Boan in 1887. The farm raised many varieties of potatoes in addition to the town’s famous Macomber turnip (Maiocco 1995:35–36). 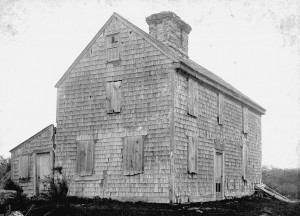 This section of town was not without mills, although they were generally smaller than the main operations at the Head, Westport Factory, or Adamsville. The Ricketson family built a series of mills in the gorge off Horseneck Road (WHC 1987:5).