This large zone covers much of the western half of Westport and includes numerous small residential and commercial historic centers. Central Village itself contains the present-day town hall and police station and serves as the unofficial town center. 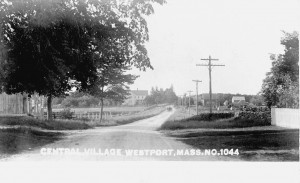 The village historically served as a central hub, and was located at the intersection of two horse-drawn stage lines (Maiocco 1995). Although the village served as the main historic core of this zone, satellite villages developed at Giffords, Kirby, Woods, Booth and Macomber corners and Westport includes a small portion of the village that developed along the Rhode Island border at Adamsville. For the most part, these smaller villages developed at historic road intersections and were named after families that established homes and farmsteads in the vicinity. Most of these hamlets were created in the nineteenth century, and as residential settlement expanded commercial and institutional structures such as general stores, schools and churches were built.

Route 177 (American Legion Highway) was a major corridor of settlement during the nineteenth century. Formerly an old colonial road providing a route east toward Westport Factory and west through Howland’s Ferry in Tiverton, at least two concentrated nodes of settlement occurred here in the 1800s. Brownell Corner represents the first of these and is located at the intersection of Route 177 and Sanford Road. This busy location undoubtedly was an attractive settlement option for a dairy farmer seeking easy transport of his products to major industrial markets. The designated National Register district includes the Brownell House (ca. 1830), the Devol House (ca. 1850), the George H. Brownell House (ca. 1868), the Fourth Christian Church, established in 1843, and the Brownell Family Cemetery, with headstones ranging from 1830 to 1930.

A second small community also developed at the corner of Lawton Lane, just west of Brownell Corner. This area was dominated by members of the Lawton family, most of whom were engaged in agriculture. Historic period maps indicate that the Lawton Lane community did not develop its own church or cemetery complex, suggesting that residents shared those resources with their neighbors at Brownell Corner.

Gifford’s Corner, located at the intersection of County and Main roads, was the location of a circa 1761 Quaker meetinghouse to serve the northern town residents. This structure, known as the Centre Meetinghouse, was utilized until 1840 when it was moved nearer to the village (Hutt 1924). The Friends burial ground located north of Westport High School marks the location of this former meeting.

Further south, the east-west transportation corridor established along Adamsville and Hix Bridge roads also supported small community cores. The Central Village area was located at the intersection of Adamsville Road and the north-south route of Main Road, and served through most of the historic period to the present-day as the official town center. 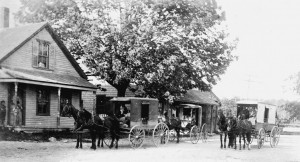 In addition to buildings, this section of town contained features such as open green space (one of which contained the Village Tree until 1961) and the Town Pump, built in 1907 (and removed in 1980) (Maiocco 1995). Central Village has been designated as a National Register-eligible area and includes more than two dozen inventoried buildings and cemeteries (MHC National Register files). 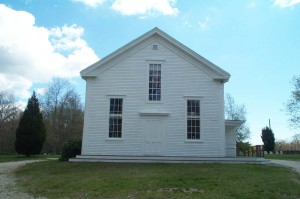 Many of the historic buildings along Main Road have remained in continuous use since the 1800s. One example is the present-day Westport Lobster Company, located at the corner of Main Road and Adamsville Road. This business is located in a stable built around 1850, used by an undertaker in the late 1800s, as a distribution center for clothing during the Depression, and as an antiques shop in the 1950s (Maiocco 1995). There appears to be some debate over the location of the first town hall building, although all historians agree that it was situated within Central Village. One source reports that the original Westport Town House, constructed in 1790, is located on Main Road (Ledoux 1995:35). 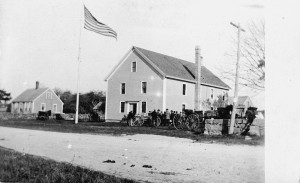 This building has been modified in the modern period for use as the St. John the Baptist Parish Hall (Smith et al. 1976). The location of the first town hall was also reported near the Westport Lobster Company on land designated by a member of the Potter family (N. Judson, personal communication 2003).

This pattern of building reuse is typical in southern New England’s coastal communities and is undoubtedly typical of much of historic Westport. The yards surrounding many of these buildings could contain archaeological deposits associated with earlier periods of use, including foundations from demolished buildings, footings for outbuildings, trash dumps, privies, and wells. 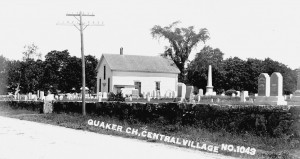 The Central Village center also contains the Westport Friends Meeting House, a structure associated with one of Westport’s most prominent African-American residents. Paul Cuffe, a renowned boat builder, philanthropist, and merchant, was part of the Westport Quaker community and is buried with his wife near the meetinghouse.

The present-day meetinghouse stands on the same parcel that housed an earlier structure, built in 1716 (Smith et al. 1976). The land for the original meetinghouse had been conveyed to the Dartmouth Monthly Friends meeting by George Cadman, whose farm extended from Hix Bridge west to Central Village (Worth 1934).

Archaeological investigations at the Apponagansett Meeting House in Dartmouth indicated the potential for earlier foundations and outbuildings to be present near that town’s current meetinghouse. These features could also be expected in the vicinity of Westport’s meetinghouse. The likelihood for unmarked burials relating to Quaker and/or Native American individuals is considered high based on documentary research and informant interviews (A. Baker, personal communication 2003; Maiocco 1995:17).

This area also contains the remains of one of Westport’s oldest documented buildings, the Waite-Potter House located north of Central Village on Main Road near Snell Brook. The exact date of the construction of his house is not known, but has been reported as sometime in the period between 1667 and 1677 (Maiocco 1995). The land on which the home stands was sold to Thomas Waite in 1661 as a 200-acre farm. The property remained in the Waite family until 1827. A 50-acre parcel including the house was sold to Restcombe Potter in 1837. Two family burial grounds are associated with the farmstead; a Kirby plot located on the east side of Main Road, and a Waite plot on the west side (Worth 1934). 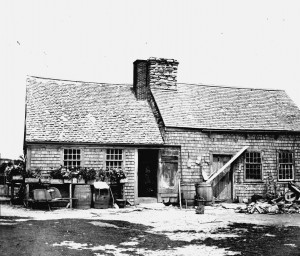 The Waite-Potter house was documented as part of the Historic American Buildings Survey in 1934 (HABS, MASS,3-WESPOS,1-1), at which point it retained almost all of its original architectural features (http://memory.loc.gov/cgi-bin). In 1940, this building was reportedly the oldest standing structure in all of southeastern Massachusetts (Maiocco 1995:31). The home may have been extensively damaged by the hurricane of 1944, and although the building fell into disrepair and was dismantled in the 1950s, structural elements including the stone chimney base are still visible today (N. Judson, personal communication 2003). Some of the home’s original architectural elements were salvaged and used in the renovation of the historic Wilbur House in Little Compton (Maiocco 1995).

The Adamsville area is the historic location of Gray’s Mill and includes numerous features found in the other mill village areas, as well as about a dozen inventoried historic structures (MHC files). The historic settlement in this area, first known as Taber Mills, coincided with the construction of Philip Taber’s mill around 1710 (Maiocco 1995:64; Smith et al. 1976). Philip Gray purchased the mill complex in the 1870s, and some of the mill components operate under the same name today. While much of this village is currently located in Little Compton, the mills were originally located within Westport’s boundaries and support structures and residential development related to the village are located in present-day Westport (N. Judson, personal communication 2003).  A saltworks was reported to have operated in the tidal marsh at the head of the West Branch, and has also been identified as a potential site area (A. Baker, personal communication 2003).

This general area may have supported Contact Period Native American settlement. A concentration of archaeological sites dating to this period was identified in Dartmouth in a similar environmental setting where saltwater resources merged with overland trail networks (Herbster and Cox 2002).

The southern section of the Central Village Zone includes the upper reaches of the West Branch. Historically, the hilly and rocky section of town around Nootas Hill was not heavily settled and was not linked via overland roads to the Central Village communities. This area was also the reported site of a Native American burial ground, recorded as an archaeological site as part of the survey. The lack of documented eighteenth- and nineteenth-century settlement suggests the possibility that Native Americans may have resided in this section of Westport. As Euro-American development spread across Westport Point and other near-coastal areas, Native families may have occupied otherwise uninhabited or sparsely settled sections of Westport.