The Handy House is not the home of a famous person — Washington did not sleep here! Yet the story of the people who lived here provides an extraordinary window into a world of ordinary lives that is otherwise lost to history. As you walk through this house you will travel through 300 years of history and encounter some of the individuals who lived in its rooms.  You will discover how they shaped the house and also, how they were shaped by the world around them.

Elizabeth (c. 1685-1768) and William White (c. 1683-1768) moved into this newly built structure around 1713. Their personal story is typical of the experiences of many of the settlers who began to arrive in Westport in the mid-1600s. William and Elizabeth were married for over 60 years. They had 11 children — seven sons and four daughters. Elizabeth, herself an only child, was fortunate to see all her children survive into adulthood. Many of them had large families of their own, residing in Westport, Tiverton, and Little Compton, and eventually moving as far away as New York State. Elizabeth bore her last child in her early 40s, at about the same time as her first grandchild was born. At the time of her death in 1768 she had 60 grandchildren. 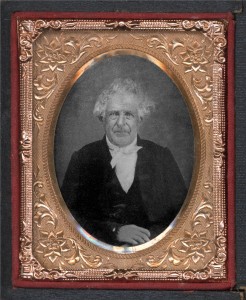 By 1800 this house was the home of Dr. Ely Handy and his family.  It had been enlarged from a simple colonial structure into an impressive Georgian residence suitable for a respectable doctor.

Dr. James Handy was a respected and compassionate country doctor known for treating many patients for free. Unfortunately, he was a poor businessman. It is said that he “never paid any bills and he never collected any bills.” Following his father’s death, James was left with the responsibility to “shelter and support” his elderly mother and to provide “a home and a comfortable support and maintenance” for his sisters “so long as they shall remain unmarried.” (Stipulated in the will of Ely Handy)

Thus the Handy House became a multigenerational household in which James and his wife and children dwelt under the same roof with his aged mother and sisters (who never did marry). Perhaps in an effort to create additional space to accommodate the generations, James built the Federal style addition at the west end of the house, borrowing a large amount of money to complete the project. Sadly, the cost of this addition combined with his reluctance to repay the loan eventually brought financial ruin to his family. 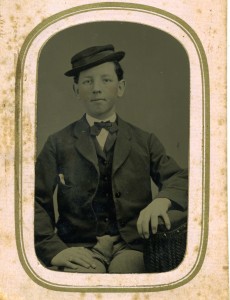 In 1911 Abbott Smith (1853-1943) purchased the Handy House. Smith was closely associated with the industrialization of New Bedford where he had developed and owned numerous textile mills and railways.  However, his roots were in Westport where he had spent his childhood, watching his father’s whaling ships sail from Westport Point.  He had also been treated by Dr. Handy, the owner of this house in the 19th century. No doubt he was drawn to the Handy House through these childhood connections and by the rural character of Westport, which provided an escape from bustling New Bedford.

Fortunately for its preservation, in 1937, the Handy House ended up in the safe hands of Louis and Eleanor Tripp, who truly understood its value as an architectural artifact. The Tripps carefully removed some of the alterations made by Abbott Smith such as the front porch and dormers. Eleanor developed a deep interest in the history of the house and Westport.