George Cadman was the son of William and Elizabeth Cadman of Portsmouth, Rhode Island. George Cadman settled in Dartmouth, Massachusetts by 1686, at which time he is believed to have possessed an 800-acre division of land, the amount granted to the original fifty-six proprietors who settled Dartmouth (then encompassing present day Westport, Dartmouth, New Bedford, Fairhaven, and Acushnet).32

George Cadman married Hannah Hathaway (b. 1662, d. before March 14, 1749). The exact date of their marriage has not been determined. Dates ranging from 1683 to simply “before 1685,” a date that corresponds with the birth of George and Eliz­abeth’s only child, Elizabeth have been given. The Hathaway family were also early settlers of Dartmouth. Hannah’s father, Arthur Hathaway held large amounts of land and occupied various posi­tions in the local government including selectman and magistrate.33

The earliest reference to George Cadman in Dart­mouth is 1676. This date has been stated by gene­alogists studying the Cadman family and alludes to an apparent record of Cadman being a juryman in Dartmouth that year.34 He is included in a list of names of “The Townsmen of Dartmouth who have taken the oath of fidelity or freeman’s oath,” dated May 24, 1686, firmly establishing him in Dartmouth by this date.35 Cadman held a number of local positions, serving as a member of the Grand Jury in 1692, town Selectman in 1692, 1694, and 1696, Treasurer in 1698, 1709, and 1711, and Overseer of the Poor in 1712.36

George Cadman is identified as one of the original fifty-six proprietors of Dartmouth in the confirmatory deed of William Bradford, dated November 13, 1694.37 The proprietors received either 400 or 800-acre allotments of land. Tradition has it that George Cadman acquired an 800-acre division.

Though no deeds or documents identifying the exact quantity or boundaries of George Cadman’s initial land holdings are known, it is nearly certain that he received an 800 acre allotment when set­tling in Dartmouth. The closest documents approximating these are boundary descriptions in the field books of Benjamin Crane, the surveyor com­missioned by the proprietors of Dartmouth to survey and record property boundaries throughout the settlement. Crane surveyed these lands between 1710 and 1721. In 1910, Crane’s field books were photographed, transcribed, and published by the New Bedford Free Public Library. Following the publication of this document, an unknown individ­ual or individuals transposed these written bound­ary descriptions onto a map of the original Dartmouth area creating the closest document we have identifying property boundaries and owners during the first two decades of the Eighteenth century.38 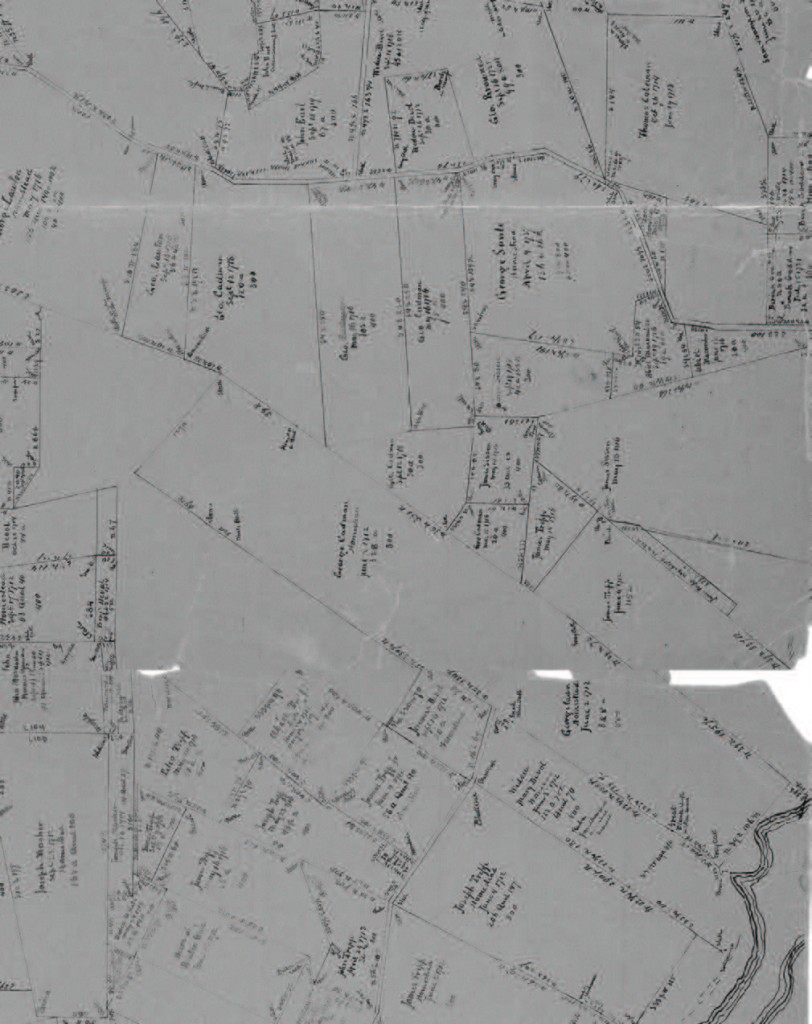 The majority of George Cadman’s property was centered around the site of his homestead which was located somewhere on the large parcel that ran northwest from the river. The exact location of his dwelling is not known. Detail from map of Westport based on the transcriptions of Benjamin Crane’s field notes. Delineator and date unknown. Courtesy of the New Bedford Free Public Library.

George Cadman’s largest contiguous parcel contained his homestead. Crane surveyed this parcel on June 2, 1712. Written at the top of the page of Cranes notes for this survey is, “George Cadman Claimes [sic] ½ of a share by deed from his father willm [sic] Cadman dated June ye 28: 1682:” his notes then go on to describe the boundaries of the parcel:

Based on the Crane surveys and descriptions of his land from his will, George Cadman’s acreage reflects typical land holdings of individuals engaged in substance farming in seventeenth and eighteenth century New England. Cadman’s main parcel of land runs in a long, narrow, principally east-west direction from the west side of the Noquochoke River (present day East Branch of the Westport River) inland.40 While the majority of George Cadman’s land illustrated on the Crane map is connected, parcels, such as the Handy house lot and other pieces of land Cadman owned but not illus­trated on the map were discontinuous. This was common in agricultural settlements throughout the region during this time and was likely typical of the 400 and 800 acre divisions throughout Dartmouth. Such arrangements allowed for greater diversity of land among owners and a fair division of resources among the landholders within the settlement. 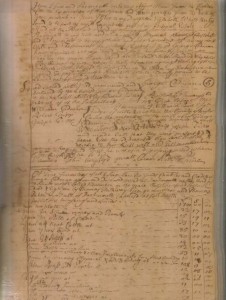 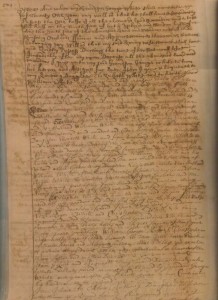 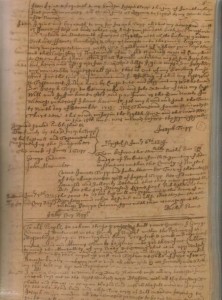 “The one hundr[ed] & five acres of upland above given to my Daughter Elisabeth White & her Husband William White after their Dec[ea]s I give to my Granson Roger White.”

“The remaing part of my four hundred acre devition being ninty five acres … I Give to my Granson Christopher White.”

“All my meadow or Sedg flat lying on the Ship flat & allso all my Last devition of land I Give to my two gransons viz: Roger White & Christopher White & to be Equally devided between my Sd two Granson.”

“To my four Gransons William George Roger & Christopher one half Share of Ceder Swomp … that is to say one quarter of a Share att my Deceas & the other quar of a share after their father & Mothers Deceas.”

To “my negro man James his freedom after … three years & three quarters from the Date of these presents.”

To “my Daughter Elisabeth White” 30 pounds.

“All the rest & residue of my personall estate I give … to my … wife Hannah whom I Constitute … Soule Executrix of this my Last Will.”

“To “my Daughter Elizabeth White Wife to William of sd Dartmouth all my Wearing apparril also my Silver tankard and Smalest Silver Spoon.”

Top “my Grandson William White my Great Bible my Bigest Silver Cup and my silver Spoon marked with the Letters W C and fifty pounds in mony or Bills of Credit old teanor.”

George White all my farming tools as Cart yoaks Chains axes hoes and other tools.”

To “my Grand daughter Sarah Brown Wife of John Brown of Tivertown my small silver Cup and one Silver Spoon and” 20 pounds “in mony or Bills of Credit old teanor.”

To “my Grand daughter Hannah Taber Wife of William Taber of Dartmouth” 25 pounds “in mony or Bills of Credit old teanor.”

“To my two Great Granddaughters Hannah Slo­cum and Mary Slocum Daughters to my Grand Daughter Elizabeth Slocum deceased” 30 pounds “in Mony or Bills of Credit old teanor … that is to say to Each of them fiften pounds as they Shall Come to the age of Eighteen years but If Either of them Shall die Before they Receive their portion … the next surviveing Sister Shall have it.”

To “five of my other Grand Children Beside who are above named (viz) Roger White Christopher White Oliver White Thomas and Susanna White to Each of them one Silver Spoon to be delivered to Each of them by my Executor … when they severaly shall be Capable to Receive them Either by age or Gurdains.”

“All the Remainder of my Estate … Shall Be Equaly Divided (Except what I shall hear after Give to Grand daughter Susanna White) Which I Equaly so Give to My Daughter Elizabeth White and my Six Grand Children namely William White Roger White Christopher White Oliver White Abner White Thomas White and Susanna White But … my Grand daughter Susanna White Shall have my Best feather Bed and Bolster in part of her Equal Shear of the Whole so Give to my Daughter and Grand Children.”

38 The author will hereafter refer to this document as the Crane map, though it is understood that Benjamin Crane is not responsible for generating it.

39 The Field Notes of Benjamin Crane, Benjamin Hammond, and Samuel Smith. p. 169. It should be mentioned that a cursory review of all of the surveys for land owned by George Cadman in Crane’s field notes results in a total of 927 acres; however, a more critical analysis of these notes is necessary to understand if portions of these parcels are divided and/or identified more than once.

40 Narrow, linear plots were common to New England towns settled along rivers and bays. Examples of this can be seen in early town plans for the original settlements of Providence, Rhode Island, Wethersfield, Connecticut, and Deerfield, Massachusetts.