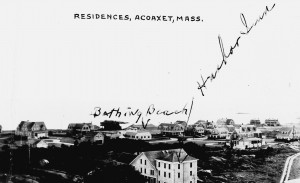 Summer resort activity in the coastal zone did not become extensive until the 1870s, when wealthy Fall River factory owners and professionals began to settle on large estates and summer colonies near the shore. The largest of these colonies, located near the southwestern corner of town, became known as Acoaxet. In addition to huge “cottages,” the development of the summer community led to the construction of casinos, bathhouses, boarding hotels and recreational facilities that catered to the insular group. So physically and socially isolated was this group that in the 1920s, Acoaxet attempted to secede and form a new town. The wealthy homeowners felt that they contributed more tax dollars than other town residents and did not benefit from community services focused around the main village centers. Despite the attempt, the issue was voted down at Town Meeting in 1926 and Acoaxet remained part of the original town (Maiocco 1995:62–63).