Using hands-on activities, your students will explore a one-room schoolhouse built in 1841. They will get a glimpse into what school and home life might have been like for students attending school around that time. 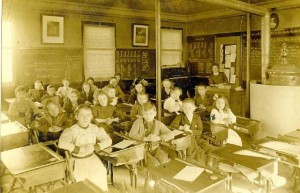 Westport Factory School, circa 1913 (WHS 2006.049.040). Discuss the similarities and differences between that school interior and their own classroom. This interior is similar to that of the Bell School. A similar discussion will also take place during the site visit.

Assign each student a name from the list Westport Names of 1841. Each name is of a real person living in Westport in 1841. However, they may not have been children at that time. If possible, have the students research the name they are assigned by going to the library or looking the name up on the internet. Provide a name tag with their “Westport Name” written on it for their visit to the Bell School.

Students should come dressed for the time period if possible. Please advise them not to wear their best clothes or a favorite piece of clothing as they will be practicing writing with a quill pen and ink.

Teachers may also dress in period clothing if they wish.

1. Create a Venn diagram comparing and contrasting your life as a student today with that of a student attending the Bell School in 1841. Include at least three different points in each section.

2. Imagine it’s 1841. Make your own quill pen and practice your penmanship by writing a letter to your cousins in Providence, Rhode Island who are attending the Quaker Boarding School.            Tell them all about your school day, your chores, what life has been like on your farm. Ask them about life in the city