A Brief History of The Pilgrim William White Family

Susannah was the great-grandmother of ‘our’ William White. New research about her has uncovered information about that was thought to have been lost. View a video presentation here.

William White (born, c.1683, died, c.1768/80) appears to have been somewhat of an enigma to those researching the lineage of the Cadman-White-Handy House until nearly the middle of the twentieth century. This may partly be attributed to the number of William Whites found in eighteenth century Massachusetts archives and genealogies, and to his relatively unexplained appearance in Dartmouth in the early years of the 1700s. 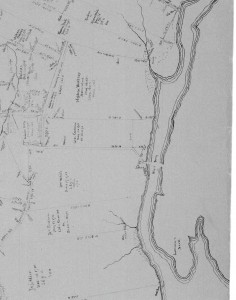 George Cadman’s parcel and Thomas Coleman’s parcel to the south identified as William White (blue). Detail from map of Westport based on the transcriptions of Benjamin Crane’s field notes. Delineator and date unknown. Courtesy of the New Bedford Free Public Library.

Perhaps the most informative document on William White is noted genealogist George Andrews Mori­arty, Jr.’s piece titled The Parentage of William White of Dartmouth, Massachusetts.44 In it, Mori­arty makes the connection between Thomas Coleman of Situate, Massachusetts and William White’s presence in Dartmouth. It is Moriarty’s hypothesis that William White of Scituate, Massachusetts or the immediate area surrounding it, was left fatherless at a very young age (approximately 5 years old), and was raised by either his mother’s second husband or another family. As a young man, William was sent to look after the land of Thomas Coleman in Dartmouth. Further substantiating this is a number of entries in Benjamin Crane’s field book with references to William and Thomas Coleman’s property:

One piece of Coleman’s land, a sizable parcel, was located immediately south of land owned by George Cadman. Not only does this detail establish the connection between William White and Elizabeth Cadman, but, furthermore, George Cadman’s land north of Thomas Coleman’s is the plot on which the Cadman-White-Handy house was constructed.

William White and Elizabeth Cadman are believed to have married about 1707.46 This would have made William approximately 24 years old and Elizabeth 22 years old. William was a blacksmith by trade and his will lists a number of blacksmithing tools valued at a significant sum of money (see discussion of his will below). William and Elizabeth are known to have eleven children that survived past infancy, seven boys, and four girls.47 They were:

No documents have been located that state a date for the building of the Handy house or exactly who built it (either the owner or the joiner responsible for its construction). Dendrochronology performed on timbers corresponding to the frame of the Period I house indicate a period of construction no later than 1712.49

The earliest references located identifying people living on this parcel are found in Dartmouth town records for the laying out of town roads. These entries describe the routes, which the “ways” were laid out, detailing the markers, distances, and individuals properties they passed through. In one such entry dated December 14, 1717, the record notes:

The subsequent entry details the road as it leads towards the river:

The exact date of William’s death is not known. He is believed to have died sometime between January 6, 1768 (the date of his will) and October 3, 1780 (the date his will was probated). In the writing of his will, he describes himself as, “very aged.” By the time of his death, William’s family had grown to include his wife, eleven children and eighteen grandchildren. In his will, William made the following bequests:

To “my teen Well beloved Granchildren namely Israel Peleg William Silvenus Obed Ruth Sarah Hannah Mary & Unice all Children to my Son George White Deceased the Sum of one Spanish Silver mill’d Doller to be paid unto them by my Executors hereinafter Named and to be Equally Divided to & amongst them my sd ten Granchildren.”

To “my Well beloved Daughter Hannah Taber …. twelve Spanish Silver mill’d Dollers to be paid unto her …. Within one year after my Deceas”

To “my son Roger White all my Wareing apparel …. and my Gun which I now have in my house & also my Case of Reazers & my hone”

To “my son Thomas White my silver Tankard”

To “my three Well beloved Sons namely Roger White Christopher White & Thomas White that note of hand which is now Due unto me from Henry Soule of Newport” dated 9 September 1765, with “all the principal & Intrest Due unto me upon sd note of hand In the old tenner . & to be Devided to & amongst them …. as followeth Roger is to have” 200 pounds “old tenner out of sd note and Christopher is to have” 200 pounds “old tenner …. And Thomas to have all the Rest …. of the sd old tenner money Which is Due unto me upon the sd note of hand both principal & Intrest It is to be understood If they my three sd sons Can Recover the Sd note or at Least the old tenner money Due upon the sd note then it shall be Divided to & amongst them as above set forth but if other Wise by any ways or means Means that note of hand Should fail and they …. Could not Recover or get the sd money thereon due that then the Gifts to them in this parragraf shall be null & void & not be paid or Discharged with any other part of my Estate” 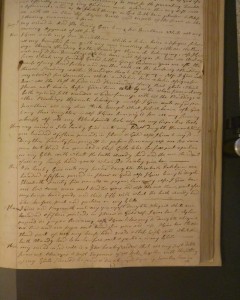 Last will and testament of William White 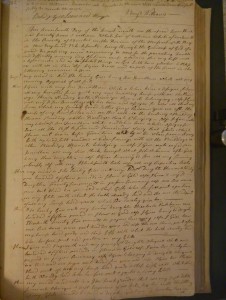 Last will and testament of William White

Elizabeth died in 1768. It is believed she was about eighty-three years old.51 No records documenting her death are known.

48 These dates are based on information from Family Group Sheet, William White and Elizabeth Cadman, prepared by Randall J. Sever. July 31, 2011. Archives of the Westport Historical Society.