The Waite-Kirby-Potter House has long been considered important as one of Westport’s oldest buildings, and it is depicted on the town seal. Although the house itself is no longer standing, a cellar hole and two adjoining chimneys remain (Figure 1, Figure 2). 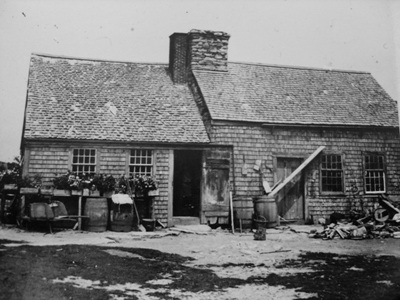 Figure 1. The Waite-Kirby-Potter House in the early 20th century. The right side is the older stone-ender; the left half and the brick chimney were added later in the 18th century. The house was destroyed by a 1954 hurricane. 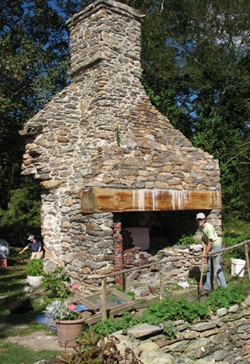 The standing chimneys consist of the stone end of the original house and a later brick chimney on the west side of the stone end. The property on which these remains stand is privately owned by Mrs. Muriel Bibeau, a descendant of the Potter family, who has protected and preserved these historic features. In 2009, Mrs. Bibeau allowed archaeologists from the Fiske Center of Archaeological Research to conduct excavations on the property. Because the site is preserved, the excavations were designed to be minimally invasive, testing only small areas, and were paired with extensive documentary research on the histories of the families who lived there. From the time of English settlement to the present, the property has been owned by just three families: the Waites, the Kirbys, and the Potters. The archaeological and documentary research revealed significant contributions by each family to the history of the site. The long occupations have contributed to a pattern of regional stability, in family networks and land use, seen elsewhere in Westport and near-by Rhode Island towns.

The Waite family owned the property from 1663 to 1728 and built the first house, a single room stone-ender. Stone end houses are characteristic of the Narragansett Basin, which includes Westport. Most examples are found in Rhode Island, and the Waite-Kirby-Potter house is a rare example of the type in Massachusetts. While the house was small, with just over 300 sq ft of interior space on the first floor, architectural historians believe that single room houses were common during this time period. The Waites’ neighbors probably had houses of a similar size and plan. Some triangular fragments of window glass recovered from the archaeological excavations indicate that the house probably originally had casement windows with diamond and triangular panes.

Three generations of the Waite family owned the property. Thomas Waite of Portsmouth bought a 200-acre parcel that he passed on to his son Reuben, who was the first member of the family to move to the property. After Reuben’s death, the 200 acres were divided among his sons, who sold and re-sold different pieces of land to each other in a complex and baffling series of land transactions. Local tradition has long held that the house was built by Reuben Waite in 1677; however, our research, using the Crane map, has shown that Reuben’s homestead was north of the Waite-Kirby-Potter house. One of Reuben’s sons, Thomas or Benjamin, probably built the house between 1707 and 1721. (The first secure documentary reference to the house occurs in a 1721 deed.)

Four generations of the Kirby family owned the property for more than a century, from 1728 to 1838. The Kirbys were responsible for major architectural changes. Between 1763 and 1793, the property was occupied by two generations: Ichabod Kirby and his wife, and Ichabod’s son David and his family. To make room for these two households, the Kirbys expanded the stone-ender by adding another room, with its own brick chimney, to the west, doubling the size of the house. The archaeological excavations found the foundations for the Kirbys’ expansion (Figure 3) and fragmentary artifacts that they might have discarded just outside the door and behind the house. 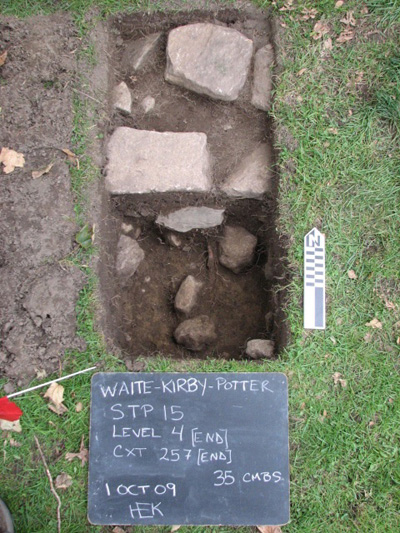 Figure 3. These large stones were part of the foundation of Kirby’s expansion to the house. Just outside the foundation, we found a plate and a milk pan that had been broken and discarded by the doorway.

Several generations of this family lived on the adjacent farmsteads as well and gave their name to the present Kirby Brook and Kirby Lane, which at one point connected Main Rd and Drift Rd before Route 88 was constructed. David Kirby may also have built a new house near the end of the life. This house, known as the Restcome Potter house, is still occupied by a descendant of the Potter family, the fifth generation to live at the site.

One of the most significant artifact collections that we found was from the Potter occupation (1838-present). Even though there was a new house on the property, the 19th-century Potters continued to use and improve the old stone end house. Sometime after 1858, Restcome Potter or his son Perry altered the firebox of the stone chimney, building a smaller, brick firebox inside it. They filled the space between the stone and the brick with dirt and artifacts, probably for insulation, to keep from losing heat to an air space within the chimney. The glass and ceramics from this deposit illuminate something about the lives of the mid-19th century Potter family. In this deposit, there were older ceramics such as a Rhenish stoneware tankard (Figure 4) and a posset pot, indicating that the family kept important or useful items until they were no longer serviceable. 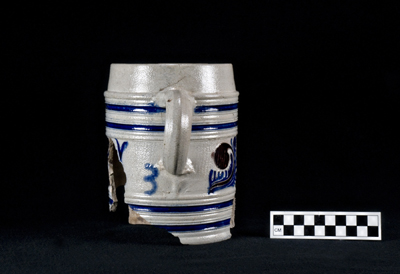 Figure 4. A Rhenish stoneware tankard, found in fragments in the fill behind the chimney. This tankard is much older than the other items that were discarded at the same time.

The tankard would have been a durable and relatively valuable item, possibly produced in the late 17th or early 18th century. It had a hole in the top of the handle to allow it to be fitted with a silver or pewter handle mount and lid. There were also a number of tea cups and saucers in the fill (Figure 5) that dated to the first three decades of the 19th century, and would have been 30 years old by the time they were discarded, again indicating a tendency to use older, serviceable items. 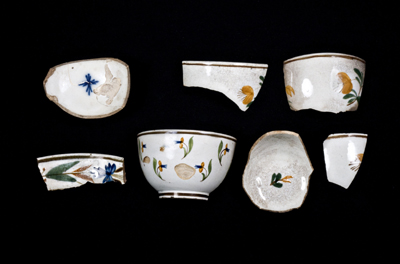 Figure 5. Polychrome painted tea cups and saucers (c. 1800-1835) discarded in the chimney fill. There were also fragments of a ceramic tea pot and a metal coffee pot.

These decorated cups and saucers would have been a modest luxury at the time they were purchased, neither the most nor the least expensive option available, though the absence of any exactly matching patterns suggest that they may be been acquired one at a time or from remaindered batches of goods. There were Mason’s fruit jars, providing evidence of home food preservation, and beverage or medicine bottles re-used for laundry bluing. Porcelain, an expensive ware type, and the varied and specialized dining and serving forms that proliferated during the 19th century were absent from the collection. Alcohol and beverage bottles are also not strongly represented. All of these suggest that the Potters were living a frugal lifestyle without extensive reliance on new, fashionable goods, whether due to lack of access to stores, to financial resources, or to personal preference.

The excavations sadly did not reveal much about the 17th century occupation of the site, which may be a result of later modifications to the property, though the documentary research brought to light the full chain of land ownership for the first time. The excavations did reveal what life may have been like during the late 18th and 19th centuries on this farm, and how the Waites, Kirbys and Potters contributed to the town’s history through the things they left behind – both material and documentary. This research, supported by the Westport Community Preservation Act, is part of a growing body of research for this area of New England which is poorly understood archaeologically, but yet has a rich and diverse history.

This entry was posted in Central Village, Native American.