We drive them all the time, but rarely give a thought to the roads of Westport. And yet they are of historical interest for a number of reasons. A quick glance at the map on p. 23 of A look at Westport through four centuries (available through the Historical Society or at Partners Village Store), will reveal that most of our current main roads were already in existence in 1830.

The roads then, though, were not paved, and many of them had more curves than do their current-day descendants: horses with wagons did not object to curves, but they did have a problem with steeper inclines. Automobiles dislike many curves, and roads have been straightened over the years. Veterans Memorial Highway (Rte. 177) follows the old course of Rhode Island Way, a road originally an Indian trail that led from Howlands Ferry in Tiverton to New Bedford. The road is more or less straight now, but if one goes to Tiverton, one will see Old Bulgurmarsh Road, a section that branches off to the north from the current road. Elsewhere along the road one can determine an older course by the stone walls that once lined the road but now sit some distance back from it.
Drift Rd. is of more local interest. It, too, was an Indian trail leading to a ford at the Head. Traces of the earlier road are easily seen just north of the intersection with the (new) Charlotte White Rd. Extension. There is a paved portion there that swings west while the current surface heads straight north; the stone walls follow that older section. More importantly the older bridge over Kirby Brook is now visible to sight and is well worth a look.

Drift Rd. has been studied by the Massachusetts Historical Commission, and has been included in their survey of Massachusetts Heritage Landscapes. (Cf. Reading the Land, MA DEM, 2003 and the Inventory Form Continuation Sheet devoted to the road.)

Adamsville Rd. is another road that shows evidence of an 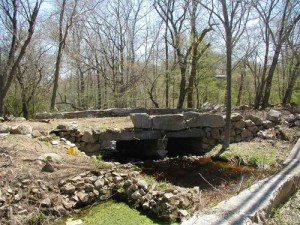 earlier course. In the dip between the two high points between Sodom Rd. and Adamsville RI, one can see a level (paved) stretch of road that reveals the earlier course. As one descends towards Adamsville one sees on the right a section of the road that is still in use. This older road then crosses the current road bed and descends on the south side of the road towards Joals Service Station. It then recrosses the road, and its course can be seen to the north of the road just before the De Paul Center. When the foliage is off the trees one can clearly see remnants of this road, including the bridge-like structure illustrated here.

It is remarkable and wonderful that these traces of earlier roads have been preserved. Many other roads (ancient ways and cart paths) may have been lost to development and new roads (e.g., Rte. 88), but much yet remains. We should endeavor to protect these valuable vestiges of our past.

This entry was posted in Native American, Transportation.