The purchase of the house in 1911 by Abbott P. Smith of New Bedford, Massachusetts and the changes made to it in the years to follow, result in an interesting transition away from its traditional use as a dwelling house to the beginnings of its recognition as a historic site, albeit in a very much Colonial Revival fashion. Historic photographs of the house predating 1911 show the building in a deteriorated condition (92, 93). Abbott Smith’s repairs and renovations to the house likely saved it from being lost to the pages of history. 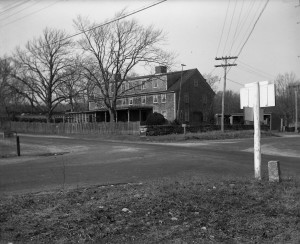 The Smith period of ownership is curious. His improvements brought the house up to a livable condition, modernized it to a certain degree, and added living space. The photographs of the interior show the rooms furnished in antiques, largely early New England pieces spanning the eighteenth and nineteenth centuries mixed with some twentieth century pieces (99-104). The whole appearance is quintessentially Colonial Revival in flavor. The breadth and volume of the collection — the pieces range from fragments of floor cloth, cooking implements, numerous tables, chairs, and chests — beg the question as to whether the house was yet another colonial acquisition; both an object and a backdrop for other objects. This may explain why the interior was treated so sensitively yet liberties taken on the exterior of the house. Further research should be performed on the Smith period of ownership to better understand and explain this era.

While Smith’s exterior improvements significantly altered the exterior of the house, work performed on the interior appears to have been largely cosmetic in nature, dealing primarily with plaster surfaces, wallpapers, and paint finishes. A nearly room-by-room collection of interior photographs and several exterior images of the house taken during this period provides a valuable archive for understanding the use and appearance of the house during Smith’s period of ownership. Luckily, much of Smith’s work added to the building rather than subtracted from it, resulting in the core of the historic house being preserved. 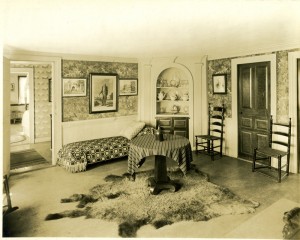 Smith’s work on the exterior of the house included building the dormers on the roof (essentially adding a third floor) and constructing the porch on the front (south) side of the house (97, 98). This latter improvement included filling in the bulkhead located at the far west window bay on the front of the building and relocating it to its present location. The window here was then changed into a Dutch door.

The Georgian frontispieces and doors were removed and replaced with eight-panel doors set in frames with three-quarter length sidelights (106, 107). It is believed that a number of the first floor window frames and sashes were also changed out at this time, especially along the south facade of the house. Images of the south facade taken prior to the work performed by Smith show the early Period II plank frame windows with molded caps. In the photographs following the addition of the front porch, the window frames no longer have these caps (107). 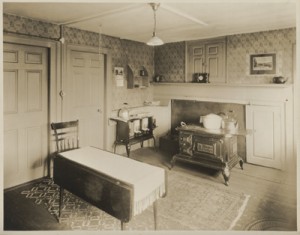 Smith likely had a significant amount of repair work done to the framing of the building in conjunction with residing portions of the building. Images from 2003 of the south side of the building with its siding removed show at least four generations of sheathing boards on the building.9 In this image, horizontal boards cover the area between the two early door openings; repairs here likely required the removal of a significant amount of the vertical sheathing. Interior photographs from Smith’s occupancy also reveal that at least two of the rising braces (both on the east side of the building) had been removed by this time, further suggesting extensive structural repairs performed by Smith at this time (96).

On the interior, Smith introduced the door opening between the second floor southeast chamber and the northeast room (104).   It may very well be Smith who removed the walls in the first and second floor rooms between the Period III house and the old kitchen on the first floor and bedroom on the second (Rooms 104 and 204 ). The basis for this speculation relates to the introduction of electricity and plumbing to the house. A number of the interior photographs show surface mounted wiring housed in wood molding , ceiling fixtures, and outlets.

While no plumbing is shown, it is reasonable to believe, owing to the extent of work performed on the building, that running water, sinks and toilets would have been added at this time.   The logical location for a toilet and tub would be one of these small rooms. Systems that required fixed elements, drain pipes, septic lines, chimneys, etc., commonly have a “memory”, that is to say, while they periodically get updated through time, they maintain their locations and/or footprints.

It is not unreasonable to believe that the first bathroom in the house was located in one of these two rooms.