Past research indicates that the house was sold out of the White family in 1794, at which time it was purchased by Dr. Eli Handy, a Westport physician. Dr. Handy lived in the house with his family until his death in 1812, leaving behind his wife, Mary and three children: a son, James Harvey, and two daughters, Polly and Hannah. Dr. Handy’s will gave his son James possession of his property with the terms that he shelter and support his mother “so long as she shall remain my widow.” Additionally, James is responsible for providing the same for his sisters until they married.

James married Hope White (a great-great- granddaughter of William White Senior, who owned the land the house was built on) in August 1817. As previously speculated, it is most likely that at this time or shortly thereafter, the west build occurs. The Period III improvements largely consist of adding to the house an attached three bay, side hall, dwelling. The addition was finished entirely in Federal style details, nearly all of which survive today. It also appears that at this time (or very shortly after it), the east wall of the first floor parlour (Room 105) was refinished, replacing what was there with the current mantle and plaster finishes. 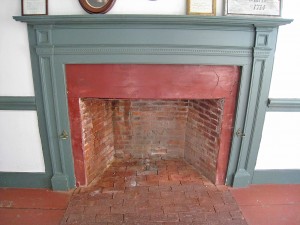 Spatially and architecturally, the interior of the west addition remains largely unchanged, offering a unique opportunity to experience an early nineteenth century dwelling of this type, but more importantly, the continuing evolution of the house in response to changes in owners, occupants and social customs.

The Federal style marked a conscious shift in American architecture away from traditional English models into a refined version of neoclassicism. Popular in the northeast of the United States roughly between 1785 and 1825, the Federal style (originating from the term Federalist) is associated with the upper social classes making up the mercantile elite in and around the seaport towns of New England whose dwellings introduced this form of design to this country. Growing out of Georgian classicism, the Federal style was not a complete departure from the design trends familiar to most people; it was rather a refinement of them. 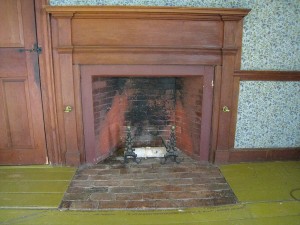 Room 209. The mantel here is a classic example of a typical Federal style mantel, more common to country and rural areas than urban. The woodwork has had only one coat of paint applied to it.

While still utilizing classical principles (bilateral symmetry, harmonious proportioning, and ornament), all work began to become more restrained and reduced down to its finest and simplest form. So, instead of large bold elements and details characteristic of the Georgian style, in Federal design we find light, subtle ornament.   At a vernacular level, the Federal style took its cue from high style architecture of the era, blended with traditional regional practices and materials. It is this form we find in the Period III addition of the Handy house.

With the exception of the Dutch door in the dining room and the recreated entry door and frontispiece in the stair hall, nearly all of the remaining woodwork and much of the plaster dates to the construction of the building. 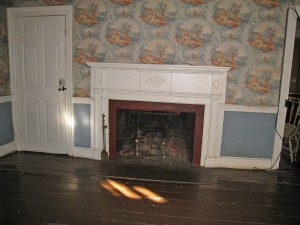 While these are excellent examples of period moldings, architraves, hardware, and mantle pieces in their own right, they become even more interesting when one begins to compare them with their counterparts in the Period II part of the house. Unlike the Period II house, where nearly all the materials used were produced through craft-based skills (hand wrought nails and hardware, water struck brick, hewn timbers), here in the Period III house we begin to see the emergence of more sophisticated building technology. Features such as iron rim locks, cast brass Norfolk latches (with turned knobs), cast iron butt hinges, and Rumford fireplaces are representative of the shift away from strictly handmade products and the emergence of machine-produced items.

The plan of the Period III addition is a variation of a type common to urban townhouses of this period and the preceding decades. The first floor of a three bay townhouse is commonly divided between a stair hall, generally located off to one side (hence side hall), filling one bay and a public space, often a parlour or double parlours, filling the width of the remaining two bays. 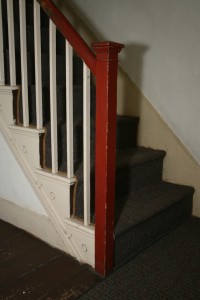 Stair hall. The Period III staircase is a reserved representation of a typical Federal style stair. The overall design is more characteristic of what is commonly found in country or rural areas.

Here, the first floor contains the stair hall, dining room, and kitchen. Off the dining room remains a china closet in surprisingly complete condition; likewise, the pantry/washroom off the kitchen is equally remarkable to have survived. This space retains its built-in cabinetry including a period dry sink.

Of interest here is how, yet again, the house is subdivided to allow for an additional family unit to live under the same roof, while affording privacy from the remaining part of the house. Whether this privacy was because the eastern part of the house was used for Dr. Handy’s practice, the dwelling house of family members, or a combination of both, is a topic of further research; however, the presence of two separate kitchens suggests additional occupants.

At the time the addition was built, it is unlikely that the room currently called the dining room would have solely been used for dining (68). That is not to say it didn’t serve as a place to eat, it likely did; however, it probably functioned as a parlor/sitting room as well. Family letters and/or a probate inventory identifying furniture that was located in this room would help illustrate its use. The design of dining tables of the period commonly allowed them to be stored with ease. Made up of at least two pieces, the tops were made to tilt to a vertical position allowing them to be stored against an outside wall or in a stair hall until needed, freeing up the room for other functions. With the china closet just off the room, there may not have been a need for a sideboard, further freeing space for a settee or desk. 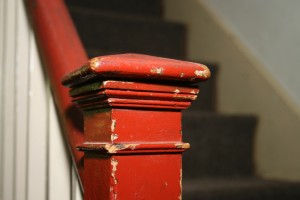 Stair hall. Detail of newell post. The general form of the staircase is rather simple: a straight run with a quarter turn at the top. It is the details applied to the stair that reveal its style, such as these delicate cymas and astragals.

What can be glimpsed of the original room reveals a tasteful and fashionable space for the period. Note, unlike the Period II house, no aspect of the building’s structure is visible in the room. Surfaces are flat with decorative treatments reserved to openings: doors, windows and the fireplace. The composition of the north wall strives for symmetry, with the fireplace flanked by doors to each side. A surbase and baseboard help divide the wall plane as well as protecting the plaster from furniture placed and stored up against it. Owing to the period and function of the room, it is possible the walls were originally covered in wallpaper rather than simply being painted.

If one takes a close study of the moldings used here (as well as elsewhere through this portion of the house), one will observe two characteristics that set them apart from elsewhere in the house. To start, the profiles of the moldings here are elliptical or based on portions of an ellipse unlike the Period II house where they are based on the circle. Additionally, the moldings used to make up the architraves and surbases are smaller and more delicate in scale than their eighteenth century counterparts.

While one would expect the second floor to be devoted to sleeping chambers, which very well may have been the case, other possibilities existed. While further research into this topic is necessary, it may be that the south room on the second floor served as a sitting room or common parlor, and the north room served as a bed chamber. As for additional sleeping quarters, these could have been located in the eastern part of the house. 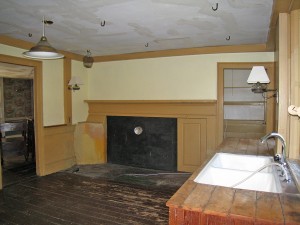 Room 106, new kitchen. This room retains its period cooking hearth and bake oven. The wrought iron hooks in the ceiling are original to the space.

It is interesting to see that the Period III kitchen does not vary terribly much from the open cooking hearth found in the Period II house. Kitchens at this period of time, especially in urban locations or of a grander house, would be beginning to see considerable changes occurring. Around the first quarter of the nineteenth century we begin to see the introduction of cellar cisterns with hand pumps in the kitchen, set kettles for the boiling of water, and the advent of the cast iron cook stove which eventually does away with the open hearth and bee hive oven. 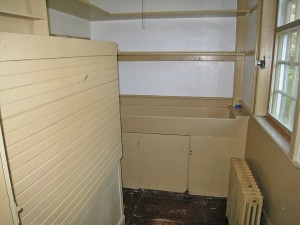 Room 108, the pantry. This small service room to the kitchen still retains its dry sink and shelving.

This kitchen, like its earlier counterpart, is in close communication with all adjacent spaces. Six door openings directly connect this room to each surrounding room. The two door openings on the east wall tell us there was direct access to the small rooms in the west part of the earlier house. Both of these doorways were created with the construction of the Period III house, likely modifying existing window openings. The two separate door openings indicate these rooms remained independent of each other at this time. Of these two rooms, the south space would have become “land locked”; that is to say it wouldn’t have had any exterior walls and therefore no windows. With no natural light or means of ventilation one wonders if this room took on a new use after the Period III improvements were made. Identical changes on the corresponding second floor rooms took place at the same time.