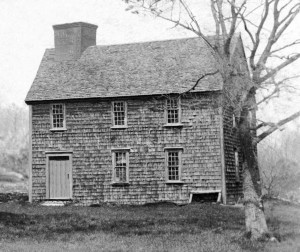 Owing to the extensive degree of work performed on the house during the Period II improvements, a large amount of Period I fabric has been removed in its entirety or encapsulated under later finishes.  Key elements such as the Period I chimney mass, stairs, the southwest corner post and the post immediately east of it were removed during the Period II improvements.  The loss of these features in addition to the majority of the Period I roof framing complicates understanding how exactly the Period I house appeared.  While the general form and mass of the building can be discerned, features such as the plan and fenestration of the building are difficult to determine.

What we do know about the Period I house is that it was three bays wide by two piles deep, and two-stories high with a gable roof.  The chimney mass was located at or near the west end of the house somewhere in the first bay. 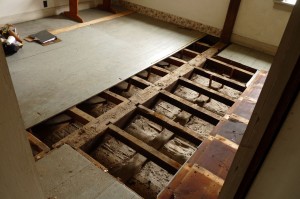 Enough of the original frame survives to illustrate the width, depth and height of the Period I house.  While practically the entire roof framing has been altered and later replaced during Periods IV and V respectively, two pairs of original rafters remain in situ.  The replacement rafters match the pitch of the originals resulting in a roof line that replicates that originally found on the building.

Those elements of the original house that are available for study confirm the building exhibited First Period characteristics.   Exposed framing members in the second floor east room and north rooms are chamfered with lambs tongue stops. 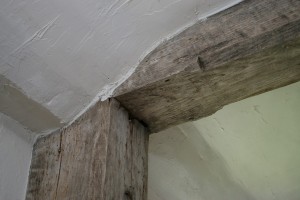 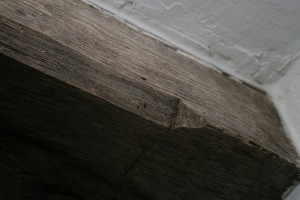 Room 201, Hall Chamber. Chamfer stop at the north end of the summer beam.

Secondary framing members, principally joists, that have been exposed by lifting floor boards in the  attic and on the second floor reveal that these elements were planed smooth and treated with a slight chamfer along their edges, indicating the floor framing at both stories was originally exposed in the house.  Close study of the summer beam running through rooms 200 and 201 reveals chamfer stops on both sides of the wall that partitions these spaces, indicating that they were originally two separate rooms.1

Accepting that the original house exhibited many First Period characteristics and given its age, it it highly likely the plan of the Period I house was fairly simple, consisting principally of one or two large spaces on each floor with an equal number of smaller, secondary spaces.  In the seventeenth century and early decades of the eighteenth century, rooms would have served a variety of functions depending on the needs at hand.  Large, multipurpose rooms were necessary to accommodate tasks such as the preparation and cooking of food, the production of household necessities (soap, candles, cloth, etc.), laundry, etc., as well as the activities of daily life, eating, sleeping, receiving guests.  It would not be until after the first quarter of the eighteenth century that specialized room use begins to introduce itself in the New England dwelling house.

A fair amount of Period I fabric remains in the house.  Some of this material is readily discernible (such as the flared posts, summer beams, and braces), while others are less readily evident owing to their similarity to Period II materials or concealed location (examples of these would be plaster finishes and floorboards).

Some elements remaining in the house that are clearly Period I include:

Two panel doors. Two of these doors remain in the house, one in situ at the door opening leading into the first floor northeast room (Room  100) and a second that is no longer in use and presently stored in the attic of the building.  The design and construction of this door is a good representation of seventeenth century aesthetics. While the construction of the door is comparable to the later four and six panel doors (stile and rail frame with floating panels, mortise and tenon joinery pegged to secure it), stylistically, the two over two panel door is less decorative and simpler.  The door retains its period hardware (wrought iron HL hinges and Suffolk latch). 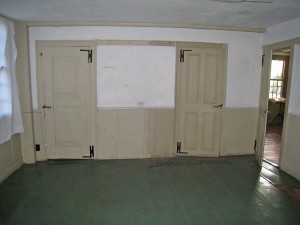 Room 102, Old Kitchen. The one over-one- panel door on the left is believed to date to the Period 1 house and has been retained in its original location.

Timber frame – While some pieces of the Period I house frame have been lost to improvements and repairs through the centuries, a large amount of the frame remains. Though much of the framing system is concealed behind finishes, portions of it are exposed in some locations as it was intended to be when the house was originally constructed.  In First Period construction, the timber frame of the building was not hidden away behind plaster and casings, but rather decorated and treated a part of the interior finish.  To enhance the appearance of these timbers, edges were chamfered or, in some instances, run with a decorative profile.  To terminate these treatments, equally decorative stops were carved at the ends; these, too, appear in a wide range of styles.  At the Handy house, those timbers seen on the second floor, east of the chimney stack provide a good representations of this.

In the Hall Chamber (Room 201) the flared posts, tie-beams, braces and part of the north plate all remain uncovered, unlike their corresponding members one floor below which were hidden away behind casing during the Period II improvements.  It is curious that these second floor elements remained exposed while nearly all others are covered by plaster or cased in finished woodwork.    Generally, if plaster had been applied or casings nailed to them, one would see lime burns and ghosts of lath or nails holes where treatments were fastened to them.  A close inspection of the timbers surfaces shows no signs they were ever covered here.

If one examines the chamfer stops on the tie-beams in both the Hall Chamber and the Northeast Room (200) you will notice that the chamfer is terminated at both ends in each room; each room is treated as a separate space.  This tells us that each of these rooms existed independent of the other at the time the house was constructed.

While a doorway currently exists in the wall between these two spaces, it is a later addition, dating to Abbott Smith and the Period IV alterations (104).  Disregarding this doorway leaves us with the west doorway to the the room (between rooms 200 and 202).  This is the original door opening to the room and retains a Period I architrave on the east side of the door opening.  This is the only example of this profile remaining in the house.