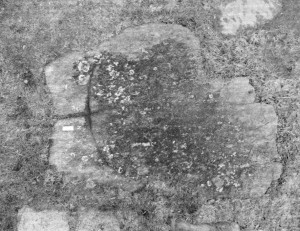 One of the features identified during the archaeological survey is a lye leaching stone or soap making stone. The irregular shaped stone measured 4.2 feet by 3.4 feet. This was the second largest stone used in the historic walkway north of the house. Since a lye leaching stone would need to be placed on a pile of rocks, this stone had been moved from its original location and placed in the walkway. 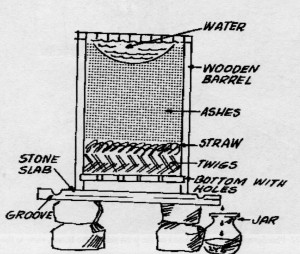 A lye leaching stone, or soap making stone, is a large, flat stone with a small circular groove cut into it. This circular groove varied in size and had a small channel cut into it. Often misidentified (or possibly unidentified) lye leaching stones were an important part of the soap making process during the historic period. The first step in the soap making process is the making of wood ash lye. This was done by placing a barrel with its bottom removed on top of the circular groove. The lye leaching stone itself was placed on a small pile of rock. The stone would be placed at a slight angle, with the groove facing downward. A layer of straw and twigs was placed inside the barrel, which was then filled with potash. Water was slowly added to the barrel, poured on top of the ashes, until a brownish liquid leaked out. This liquid was caught by the circular grove, ran out the channel, and fell into a collection vessel. This was the first in the long and sometimes difficult process of making soap.