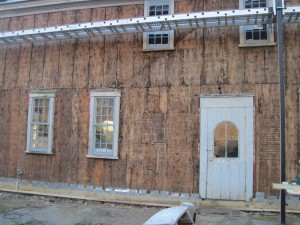 The widespread appearance of the ell in New England domestic architecture of the middling class occurs during the last quarter of the eighteenth century and became well established by 1800. Adoption of this distinctive architectural feature grew out of a variety of social and cultural practices taking root in the region at this time. These changes affected the way in which rooms in dwelling houses were utilized, the emergence of individual rooms for specialized functions, and coincided with the popular acceptance of the Georgian house form as the preferred design for dwellings during this time.

While not always the case, more often than not, ells existed to house many of the service spaces needed in the daily operation of domestic life. Depending on the size of one’s ell, or back house as they were often referred to in the eighteenth and nineteenth centuries, these structures might contain anywhere from a single room to a series of successive rooms, each with a different purpose. Examples of such spaces include summer kitchens, butteries, dairies, laundry/wash rooms, wood sheds, carriage sheds, and privies. 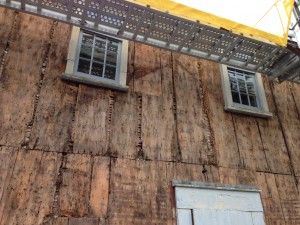 The role of the ell was not a unique creation, but rather its form appears to have evolved out of a response to the changes in building and house forms taking root during the latter part of the eighteenth century. The widespread adoption of the fully developed Georgian house with its fundamental aesthetics rooted in bilateral symmetry, and proportion among elements resulted in a building form that exhibited these principles. Its predecessor, the lean-to house , a long and well established building type common throughout New England, by its nature was asymmetrical when viewed in profile. From a functional perspective, the incorporation of a lean-to, whether added or as part of the original construction, significantly influenced the operation of a building’s plan by offering greater space to divide the use and role of rooms between. Generally speaking, the presence of a lean-to provided the opportunity to remove cooking and food preparation from the hall and dedicate it to a kitchen commonly located in the lean-to. Add to this the ability to situate service rooms such as a buttery or dairy in the lean-to, and the end result is a house plan that has a clear hierarchy among spaces, with public rooms located to the front of the dwelling and lesser spaces relegated to the rear, creating a clear separation of uses.

Though the Georgian form of architecture was introduced to the colonies by the beginnings of the eighteenth century, it wasn’t until after the first quarter of that century that it became a common style of building throughout New England. While many attributes of the formal Georgian house were adopted and integrated into the dwellings of rural middling families, an equal number of well-established features common to dwellings of previous generations were retained. The most pronounced of these features to carry over was the continued use of the center chimney stack (as opposed to separate interior chimneys or end chimneys) which often generated a house plan containing a lobby entry, and the principal rooms to the front and secondary space to the rear like that found in a fully developed lean-to plan. Instead of a long sloping, rear roof forming the lean-to, the Georgian house strove to capture its plan under a single gable, which generated a symmetrical profile to the house in keeping with classical aesthetics. The result was a vernacular architecture that merged genteel aesthetics with function and convenience. The Period II, c. 1785 Cadman-White-Handy house is a good representation of this vernacular Georgian house form.

The exact dates of when the ell was constructed and when it was demolished are not known. While future research may shed better light on this subject, for now, these can only be speculated. When considering all that is currently known about the house, it is this author’s belief that the ell relates to the Period II (c.1785 to c. 1812) era, and may have been built at the time the Period II renovations took place, or sometime shortly thereafter.

While much of the Period II Handy house remains intact, little evidence survives to inform us as to the details of the north ell. What we can say for certain is the ell was of frame construction, measuring approximately thirteen to fourteen feet wide and equally tall at its ridge. The ell did not have a cellar. Scars and ghosts on the sheathing boards of the north wall of the house indicate the ell had a gable roof, and that the southernmost room of the ell had a south wall finished with wainscot and plaster above. The remains of what appears to be a stone walk survive to the east of the ell’s foot print suggesting an entry near this location.

With respect to rooms, the number of rooms and any sense of plan is unknown. While guesses as to the purpose and function of the ell are purely speculative, thoughts as to what it may have housed may be better informed by looking at the main body of the house. Accepting that the first and second floors contained public rooms to the front of the house, likely small chambers immediately off of these rooms, and the kitchen on the north side of the chimney mass with service rooms to its west (thought to be a buttery) and east (possibly a dairy or milk house), the ell possibly may have housed a summer kitchen, laundry/ wash room, wood or carriage shed, or even an attached privy. While the possibility exists that the ell could have been used as a chamber or public space, its location in relation to the other rooms of the house makes this less likely.

Though once fairly common dwellings in the area, these eighteenth century house forms have slowly disappeared through the decades.  While a number still remain, many of these have been greatly altered as a result of repairs and improvements.  A good representation of these building types can be seen in the photographs of Fred W. Palmer owned by the New Bedford Whaling Museum. Taken during the early decades of the twentieth century, Palmer captured images of a great many examples of early vernacular dwellings throughout Bristol County.

Palmer’s images provide a valuable glimpse at the appearance and form of these dwellings, many of which appear to have been little altered over the decades since their construction. Within this collection are two photographs identified as the Gidley Farm. One of these photographs is of the house showing the gable end and rear ell. While the dwelling is a three-bay house versus the five-bays of the Period II Handy house, in profile, the gable end appearance bears a remarkably close resemblance to the Handy house. The single story ell contains a chimney at its end wall suggesting the presence of a stove, fireplace, or set kettle, possibly making this a summer kitchen or laundry. While this image is not intended to illustrate the exact appearance of the Handy house ell, it is a good representation of a contemporary ell of an approximate massing found at the Handy house.