Westport contains waterpower sources in virtually every section of town.  As a result, the historic period development of commercial and industrial sites is closely tied to Westport’s mills.  Mills operated throughout the entire historic period, and ranged from simple short-term wheels along seasonal streams to extensive complexes of multiple mill types along major streams and rivers.  Documentary sources indicate that mills are known to have existed in or near each of the village areas and along major as well as minor drainages.

The earliest mill sites in Westport were likely located in close proximity to the first Euro-American settlement areas and expanded as the population grew.  Access to waterpower was certainly a consideration for the seventeenth- and early-eighteenth-century residents, as evidenced by the selection of the Head of Westport and Adamsville as two of the earliest settlement areas.  These mills served primary needs such as grinding grain and cutting timber for housing.

Mill sites continued to develop during the eighteenth century, as more people settled the villages of Westport and established homes and businesses.  Many of the seventeenth-century mill sites were improved and/or rebuilt over the historic period, as construction techniques improved and mill types diversified to include fulling, carding, cotton, shingle, cider, iron, salt, and oil mills.  Additional mills were built on waterways that housed early mills, often creating a line of structures that stretched up and down the town’s rivers, as evidenced at the Head of Westport.

A seventeenth century water-powered mill site was developed at Adamsville by Philip Taber, and is reported to be one of the earliest mills in the immediate area (Butler 1973).  While much of this village is located in present-day Little Compton, the mills were located within Westport’s original boundaries and support structures and residential development related to the village are located in present-day Westport (N. Judson, personal communication 2003).  Visible elements include a millpond, small commercial village and the ca. 1870s Gray’s Mill building.

During the historic period, the Head of Westport area served as the town’s center of water-powered mills.  Numerous enterprises were established along the Noquochoke (upper East Branch) River, Bread and Cheese Brook, and their confluence at the Head.  George Lawton, Benjamin Waite, and John Tripp operated a grist- and sawmill complex in 1712 on a 70-acre parcel at the Head.  Lawton’s Mill was located on the west side of the East Branch, while Waite’s Mill, later known as Tripp’s or Chase’s Mill, was built on the east side (Butler 1973).  In 1795, William Rotch, Jr. purchased Waite’s Mill in order to better supply his New Bedford whaling outfit.  Rotch paid $3,000 for a 20-acre parcel that included grist- and sawmills, a forge, a storehouse, a blacksmith, and a house (Butler 1973).  The 1795 map of Westport depicts many of these elements at the head, including saw- and gristmills just north of the Head, a forge at the confluence of Bread and Cheese Brook and the Noquochoke, and a second pair of saw- and gristmills just south of the Westport Factory area.

The Westport Factory area is associated with the nineteenth-century cloth industry, but there was a documented mill at this location as early as 1795 (Butler 1973). In 1811 Ephraim Thompson, Pardon Gifford, and Timothy Macomber operated fulling- and sawmills at the site, but a year later their interests were sold to John Mason of Swansea and a group of investors who wanted to start a yarn manufactory.  The group purchased additional tracts of land along the East Branch and Lake Noquochoke, and in 1814 the business was officially known as the Westport Cotton Manufacturing and Westport Mechanics Factory (Butler 1973).  In 1822, the major shareholders sold their interests and the mill became known as the Westport Manufacturing Company.  A fire in 1826 destroyed a large portion of a main wooden mill building, and the structure was replaced by a stone mill that was partially demolished in the 1980s (B.Wyatt, personal communication 2004).  The mill enjoyed success near the end of the nineteenth century under the authority of brothers George and Elijah Lewis and William Trafford (Butler 1973).  The business created a need for a large workforce, and commercial buildings and worker housing units located in the historic district reflect the nineteenth-century activity in the area (MHC National Register files).  At its peak, the Westport Manufacturing Company produced more than 1.5 million pounds of product per year (Hutt 1924:822).

Eighteenth-century mills were certainly not limited to the Head of Westport area.  A mill site was established in 1817 by Jonathan Borden located south of the Narrows off Sanford Road.  Large family complexes may have supported their own mills; an example of which may be the mill at the Lawton Farm south of Hix Bridge.  The Mouse Mill Brook supported a number of historic period mills; the brook’s name is reported to be a reference to one of the smaller gristmills that produced only enough grain to “feed a mouse” (Butler 1973).  The 1795 map depicts a sawmill on the northern end of Bread and Cheese Brook and a gristmill south of Hix Bridge on the east side of the East Branch.

Water-powered mills were not the only type present in Westport during the historic period.  David Devoll operated a paint store on Drift Road at the Head that utilized a windmill to grind color for paints (WHC 1987:32).  Several windmills were located at the Point and served the salt manufactory.  One windmill is depicted just north of the Point on the 1795 map of Westport.  A windmill also appears on the 1830 map in roughly the same location, and what appears to be a wind-powered mill was located across Main Road from the hotel on what was known as the “mill lot.”  A second windmill was located across the street in the vicinity of the current cemetery.  This structure was described as being “rigged like a schooner with a great sail and eight jibs.  There was a long mast, at one end of which there was fastened a cart wheel” (Hall and Sowle 1914:21–22).

Nineteenth-century maps and town histories document the proliferation of mills and indicate that even seemingly marginal water sources, such as small streams associated with swamps and bogs, were being utilized as power sources.  Based on the documentary record, mills continued to flourish in town through the early and mid-nineteenth century as the various villages continued to grow.  Mill structures became more complex as technological advances were developed. 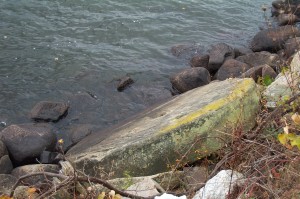 Photograph of mill stone lining pond at the Narrows.

As the twentieth century approached, the reliance on waterpower began to diminish. Most processing and manufacturing could be completed more efficiently using steam, gasoline, and later electrical power, and goods were easily imported from other areas via overland routes.  As mills ceased operation, salvageable materials were likely reused elsewhere but structural remains and features such as pits, head and tailraces, and millponds were left in place.  Many of the town’s granite mill stones can still be found in Westport as paving and door stoops, and inscriptions on individual stones can provide clues as to the original locations of early mills.  A series of mill stones line the water’s edge along Route 6 at the Narrows (C. Maiocco, personal communication 2003) .  These stones could have been transported from nearby Westport mills. 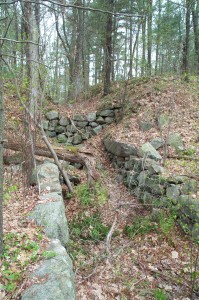 Archaeological evidence of Westport’s historic mills has been only minimally documented, and is limited in most cases to preserved foundation remains and wheel pits that have been identified by local historians (e.g., Head of Westport).  Because of the location of many mill elements within and/or immediately adjacent to wetlands, streams and other waterways, modern period development may be limited in many historic locations.  This is particularly true for undocumented or underdocumented mills located in peripheral sections of town (outside the major villages) and in areas that are currently wooded and/or undeveloped (Figure 5-9).  A number of previously unknown historic period mills have been identified through the current survey in these sections of town (see Chapter 6).  Investigations of historic mill sites should include thorough background and archaeological research prior to any reconstruction and/or repair efforts to document these important historic resources.  Above- and belowground archaeological resources that could be expected on mills sites are extensive and could include: dams, ponds, channels, head and tail races, wheel pits, grinding stones, and building foundations as well as machinery and parts (stone, metal, wood) used in various types of mill operations over the historic period.

This entry was posted in Mills.