Not much is known about how the holidays were celebrated at the Handy House, however we’ve uncovered that Thanksgiving 1927 was a real hair-raising time!

Abbott Smith, who purchased the Hix Bridge Road home in 1911, hosted 48 of his nearest and dearest at one large table out on the front porch, according to Smith’s grandson, also named Abbott, who wrote about the event in the Millbrook (N.Y.) Round Table in 1993.

“The logistical and culinary planning and execution of such an affair was delegated to the family butler (Maurice), who proved stunningly up to the task,” wrote Smith, the husband of Round Table columnist Betty Smith.

“Pots, pans, china, silverware and high and low chairs were volunteered and delivered by various families,” said Smith. “And such food as turkey and pies that could be all or partially precooked was done that way in various family kitchens, and delivered to our family cook, Anna.”

Young Abbott wrote that he particularly recalled the noise level “being quite high as impatience and hunger stirred up the volubility and some crying and screaming by hungry young” as well as the adults who competed to be heard above the crowd.

At 3 p.m., after his grandfather led the crowd in a prayer of Thanksgiving, dinner was served.

“Various ‘borrowed’ maids and Maurice scurried hither and yon feeding the tribe,” wrote Smith. “The gargantuan turkeys were carved at both ends of the table, one by Grandpa and the other by Uncle Arthur Delano, a senior-in-law.

“The maids did yeoman service keeping everyone’s plate full, following Maurice’s quiet directions from the house dining room where he could observe everything by opening the door just a crack.

“The major event – an accident, really – happened as the gravy was being served,” wrote Smith. “Maurice appeared with a large gravy boat and started down the outside of the table. Suddenly he lost his footing on the unfamiliar floor, the gravy boat crashed, and a river of gravy started to flow down the wooden porch floor.

“At the same instant, some of us could see a strange object scudding along on the top of the gravy river,” he recalled. “It was Maurice’s perfect toupee, upside down in the stream of gravy (and) at the same time, stretched out fully was shiny pated Maurice, swimming face down in the flow.”

“Once he grabbed his toupee and stood up to expose his soiled tux and shamed face, some people (like me) just couldn’t keep from laughing briefly,” he said. “Finally, we all bushed and stored up our laughing for some later and more private time.”

The red-faced butler would not be seen again that day, said Smith, although his “trembling voice could be heard from behind the door instructing the maids on whom to serve next, and we also heard the occasional restrained tittering of the girls as they passed him going in and out.”

Smith said no one had a clue that the butler’s “perfectly-coiffed headpiece was not his own hair. “His humiliation was felt by all.”

After the Maurice incident, the family agreed “such a massive family meeting was not to be attempted again…the strain was just too great.”

Abbott Smith’s grandson’s Thanksgiving memoir appeared in the Round Table’s Nov. 25, 1993 feature “My Side of the Street,” a weekly column written by his wife, Betty.

Photographs of the interior of the Handy House during the time that Abbott Smith owned the house: 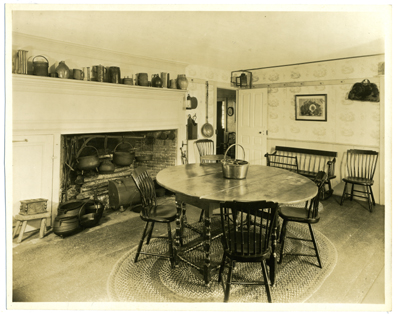 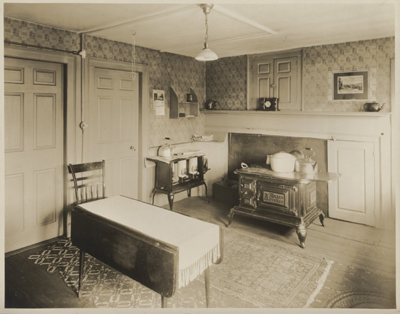 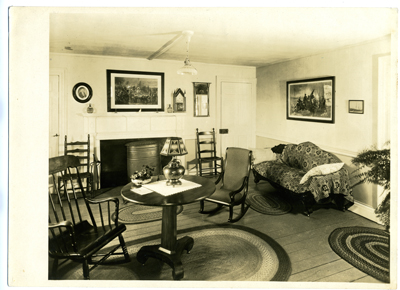 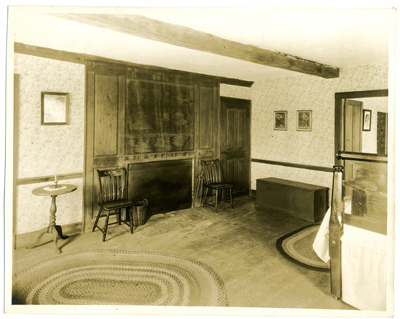 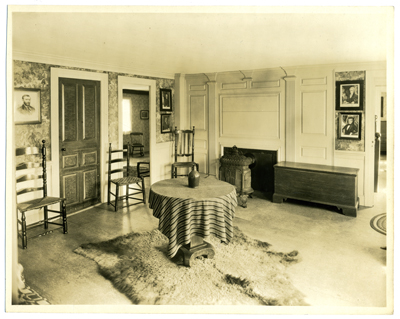 This entry was posted in Handy House, Twentieth Century.