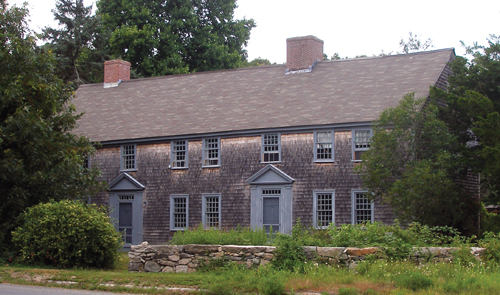 Overview of the Project

The Westport Historical Society faces an exciting challenge: the opportunity to purchase and preserve – for the benefit of the entire community – one of Westport’s most significant colonial-era houses. Known as the Cadman-White-Handy House (and commonly referred to as the Handy House), the 32-acre property is located at 202 Hix Bridge Road, at the intersection with Drift Road. Since the house first came on the market in June 2010, the Westport Historical Society has worked to determine the current condition of the house, and has developed preliminary plans for building stabilization and for making the site publicly accessible.

How will this project be funded?

On December 7th Town Meeting voted to approve Community Preservation Act funding to enable the Historical Society to purchase this property. Stabilization and rehabilitation costs will be funded through a combination of private and state grants and a multi-year capital campaign. We continue to refine and review potential costs.

Why is the Cadman-White-Handy House important?

The Handy House provides a compelling and inspirational doorway into Westport’s past. The house was built in three phases over more than a century, beginning c.1710. A major addition was constructed between 1730 and 1750, and a third section was added in 1825. The house has retained its architectural and historical integrity, and it remains one of the best extant examples of 18th-century architecture in the entire Southcoast region. In recognition of its special significance, the Handy House was placed on the National Register of Historic Places in 1994.

This property has been part of the human and historical fabric of Westport since the arrival of the earliest European settlers. The house was built by George Cadman in 1710 for his daughter Elizabeth, probably on the occasion of her marriage to William White. It became the home of the White’s various descendants, and eventually the residence of Westport physicians Dr. Eli Handy (1764-1812) and Dr. James Handy (1792-1868). In 1937, the house was purchased by Louis Tripp, who later married Eleanor Swanteson. Louis and Eleanor Tripp completed a meticulous restoration of the building and Eleanor subsequently became a well- respected and much-loved authority on local history.

What are the goals of the Westport Historical Society in purchasing this property?

The Handy House, together with the nearby Town Farm will form a cultural hub around which the community can reconnect to its heritage. Our vision for the use of this site has been motivated by the need for a plan to preserve and protect the Handy House and to facilitate its ongoing use and enjoyment by the community. Our immediate goal is to stabilize and rehabilitate the building. Our long-term goal is to move the headquarters of the Historical Society to this important property.

Our long-term vision will be to:

• Create an inspirational teaching tool by means of which the entire community can experience and learn about local history through direct contact with an authentic 18th-century building;

• Establish a setting for the Historical Society in which new avenues for developing our mission – of education, collection, exhibition, research and public programs – can be explored;

• Provide a location wherein the Historical Society will be able to grow, both in terms of services for and impact on the local community;

• Enable ongoing maintenance of the Handy House and provide for ample and welcome public access.

What is the historic preservation restriction for the Handy House?

The house and its surrounding 2 acres are protected by an historic preservation restriction established by Eleanor Tripp in 1991. This restriction, overseen by the town-appointed Westport Historical Commission, limits changes to the interior and exterior of the house. For example, under the restriction changes to all woodwork, fireplaces, flooring and plaster are not allowed. (The restriction does allow for modernization of utilities and installation of a handicapped-accessible bathroom.)

What are the plans for the land that is part of the Handy House property?

Although an appraisal conducted for CPC identified possibility for one house lot 100 yards west of the Handy House, we believe that the development of land with frontage along Hix Bridge Road would immediately devalue the significance of the Handy House as an historic asset. The feasibility for development is significantly limited by wetlands which make up approximately 40% of the acreage, by the lack of soil types that can support a septic system. We seek an appropriate use of the land that respects the rural character of Westport and honors the historic landscape surrounding the house and invite input from the community on potential recreational and low impact uses.

Of the total of 32 acres, 8 acres bordering the Westport Town Landfill were placed under a conservation restriction by Eleanor Tripp in 1974. This restriction, administered by the Westport Land Conservation Trust, specifically prevents the construction of buildings or roads. These 8 acres will be gifted to the Town of Westport.

How can interested town residents help with this project?

As the project evolves, there will be many opportunities – in fundraising, research, public education – for community involvement. If you would like to become an active supporter, please call Jenny O’Neill at 508 636 6011 to inquire about joining the “Friends of the Handy House,” a committee of the Westport Historical Society.

What is the mission of the Westport Historical Society?

Founded in 1964, WHS is a tax-exempt 501 (c) (3) organization with 450 members. Our mission is to collect, preserve and document the material culture of Westport, and to educate and connect the residents of the area to their heritage through public programs, exhibits, publications and research. Currently based in the Bell Schoolhouse at 25 Drift Road, the Historical Society maintains an active schedule of public programs, exhibitions, educational opportunities and publications. The Society also holds a significant collection of historical materials, paintings, photographs, documents, and other artifacts relating to the region.

This entry was posted in Handy House.