Abbie Maria Dexter Hicks went whaling in 1873. We know this because she kept a diary from June 23, 1873 to September 13, 1874 in a tiny book that measures only 5” by 3” in the collection of the New Bedford Whaling Museum. 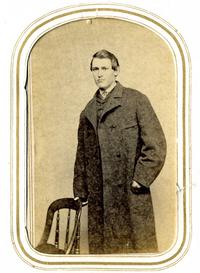 Two months after their marriage they left on a whaling voyage to the Indian Ocean on the bark Mermaid. For two and a half years the Mermaid was her whole community and she the only woman on board. Almost immediately she is seasick. But she courageously begins her work, which, for her, is sewing. She starts by making chintz curtains and then begins work on shirts. The weather turns rough and she takes to her bed, but gamely, the sick woman goes up on deck to see the first whale brought in—“a black lump in the water.” Three days later Abbie states that the smell of the boiling oil makes her so sick she takes some ether in hopes that it would help her.

On Sept. 29, 1873 she reports “a heavy cask rolled on him (a Mr. Allen) and he was lucky that it did not kill him.” Still ill, she “lost the best part of her supper” but the steward’s bean soup was “quite a treat after so much salt beef.”

But by November she is enjoying the lovely tropical weather and moonlit nights. She begins to study navigation, in addition to sewing, washing, ironing, reading and giving lessons to the cabin boy that they picked up in the Azores.

Abbie is four months pregnant when, in March, they meet and gam (visit) with the Greyhound, another Westport vessel. She befriends Mrs. Wicks, the Captain’s wife, who is homesick and unhappy. The two women have a long talk. At last another woman to talk to! Mrs. Wicks promises to help her when the baby comes.

In May of 1874, they make port at Mahe, an island in the Seychelles. Here, she and her husband rent a house where she will live for the next couple of months until the baby comes. Her husband returns to the sea. Her first child is born on July 23, 1874. Once again succinct about a major milestone in her life, her diary reads only “baby born about 12—caught two rats.” Abbie returns to the ship on August 29th. She reports that her husband carried her in his arms and Mr. Williams carried the baby. Husband forgot the dog and went back for him. Her diary ends on the 13th of September − the little book being filled but the voyage continued for another 1 1/2 years.

This entry was posted in People, Westport Point, Whaling folks.