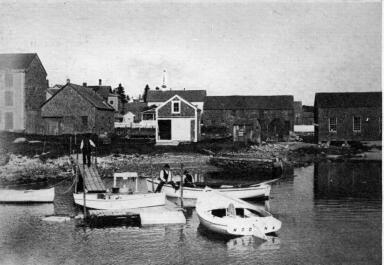 East Dock at Westport Point. The small boat yard of Frank Sisson & Eli Allen east of town dock built the schooner KATE CORY for Alexander Hamilton Cory in 1856. The CORY, seventy-five feet in length and rigged as a schooner, was built as a small sperm whaler for the South Atlantic. In 1858 she was converted to a hermaphrodite brig. In 1863 the crew of the CORY stopped for provisions off the coast of Brazil where the vessel was captured and burned by the Confederate raider, ALABAMA. Models of the CORY can be seen at the Westport Public Library and the Westport Historical Society.