We are so pleased to be able to share a celebratory bell ringing with our community. (Thank you to Merri Cyr for creating this wonderful video.)

The Westport Historical Society gratefully recognizes the generous support provided by a Community Preservation Act grant for the restoration of the tower and roof, and the restoration of the bell made possible by a gift in loving memory of Elizabeth Brownell (Pettey) Grundy by her grandson Albert E. Lees, III, President, Westport Historical Society.

On February 6, 2021, the recently restored bell rang nineteen times, once for each of Westport’s historic one-room schools, reviving a sound that has not been heard at the Head of Westport for many years.

Imagine for just a minute the year 1841 … 180 years ago when the Bell School House began its life. A magnificent Greek Revival structure on a hill, watching over the bustling village at the Head of Westport. A style that symbolized our new country’s hope of democracy and opportunity. Most importantly, the Bell School House, along with 18 other school buildings throughout the town was a place where boys AND girls could come together and expand their learning beyond the home and the farm. And the welcoming sound that the children and all those in the village heard every school day was the sound of a bell, cast in 1847 by Henry Hooper, a former apprentice to none other than Paul Revere.

One such little wide eyed girl who jumped down from a covered wagon … yes she really did get to school in a covered wagon … and ran through one of these very front doors was Elizabeth Brownell Pettey, later Grundy. The year was 1905. The bell rang, and Elizabeth began a journey that would take her through childhood, adolescence, and adulthood. Through ups and downs, joy and sorrow, the ravages of disease, economic collapse and wars but also happiness, a loving family, and a life well lived, Elizabeth Pettey Grundy like so many of her generation witnessed a remarkable century. And standing on top of this hill, witness to these same events was the Bell School House.

You see, buildings are much more than bricks and sticks; paint and putty. They are containers of memories; evocative spaces that allow us to remember the past and dream of the future. The Bell School is one such place, a living reminder of that which once was, and also that which might be. Now is our time to write a new chapter in the history of this building, this village, and our town. What that might be only time will tell, but we have no choice but to march forward.

But what of the bell? For nearly 70 years this bell did not hang in this belfry. After the Bell School no longer held classes, say around 1906 or 1907, it found a new home at the Head School, just around the corner on Reed Road. Fortunately our bell was returned by the town to its rightful place on June 18, 1976 and has hung here ever since. It’s sound has not been heard over this village for so long that many of us cannot remember when.

Today that all changes …

I would like to introduce some very special people in my life. First, my mother Florence Grundy Lees. 90 years young yesterday, she is the sole surviving child of Elizabeth and Elmer Grundy and their only girl. Al, Ray, and Walt Grundy, my mother’s three older brothers have since passed away. Their children … my cousins … are here today for this dedication. Sharon Grundy Martori, daughter of Al, Ray Grundy, son of Ray, and Walt Grundy, son of Walt. My sister Janice lives in California and is not able to be here. And I want to give a special thank you to my wonderful wife Cindy, who continues to put up with me, in spite of myself….

So now, we present this gift to the people of Westport and dedicate this bell in loving memory of Elizabeth Brownell Pettey Grundy, that little girl who jumped off the covered wagon and ran through these school doors more than a century ago. 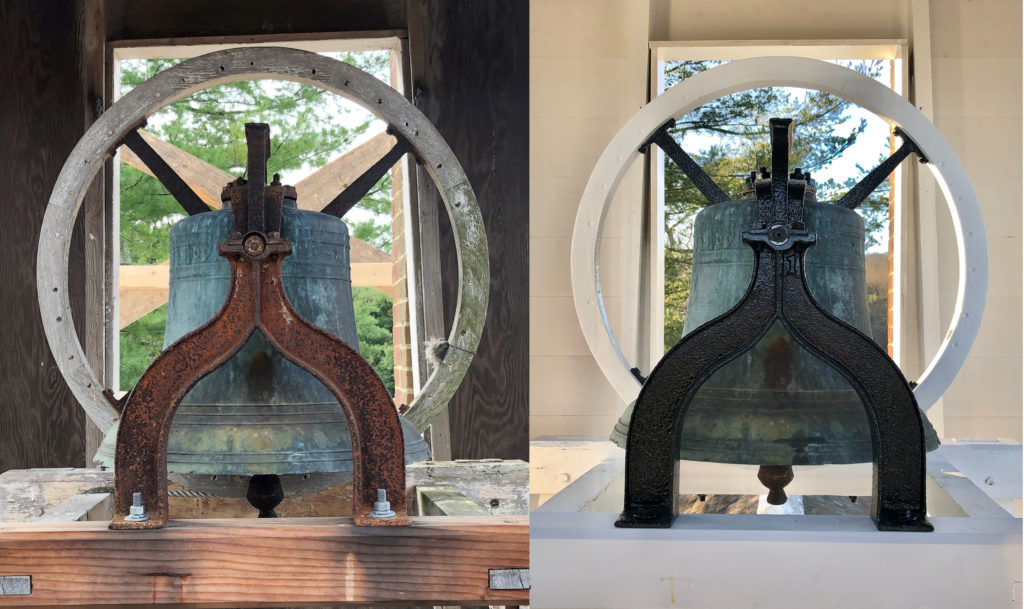 What is the significance of the bell?
Bells and their auditory significance have been described as “a wordless voice that resonates in the heart of mankind.”
The bell measures 2 and 1/2 feet across and weighs 250 pounds. It was cast by Henry N. Hooper & Co. in 1847. Hooper was an apprentice of Paul Revere and became well known for his highly prized bells and chimes. Today, his bells are still found in churches, courthouses, universities and schoolhouses throughout New England.
Schoolhouse bells have been part of the American soundscape for centuries. Bells were considered a status symbol, along with a belfry. Schoolhouse bells are usually 20″ to 28″ across the mouth and were meant to ring at a higher pitch than church bells so as not to confuse the hearer.
How were bells used?
•       Bells were used to call students to class.
•       School bells could also be rung to announce the death of a local person by tolling once for each year of their life.
•       The bell warned the community of dangers such as fires and accidents, and was used to ring in special occasions. 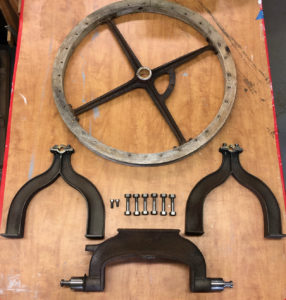 The project
After many years of deferred maintenance, the bell tower was in need of major repairs and restoration. The restoration effort has resulted in a more appropriate and historically accurate appearance with original trim details including a copper roof.
We were also able to take care of repairs to gutters and other exterior features.
The building also received a new cedar shingle roof.
This is the fourth bell tower and bell to be restored by preservation carpenter Jeremy Ballard of Heritage Restoration. The structure that holds the bell was stabilized, rust removed, and hardware replaced to match original specs. Fortunately the original bell wheel was in good shape. The newly restored tower is also well protected by copper screens and the gutters have been replaced to match original profiles.
The most challenging aspect of this project, according to preservation carpenter Jeremy Ballard, was the logistics of how to reach the bell and the constant need to climb up (and down) the staging. He estimates he climbed up (and down) 1400 stairs each day. We decided not to calculate the dizzying total of stairs that he has climbed during the months-long project.