Page 47 of Tony Connor’s “Small Town Big History” made reference to Mouse Mill Pond. This triggered lingering memories of this Westport site and I decided to write about it and a network of ancient ponds that existed when my family migrated to Westport in 1949. This review of historical facts is likely foreign to most of today’s Westport residents.

My first sight of this pond was on a cold snowy winter’s day in mid- March 1949 when my family immigrated from our native French Canada. At age 13 I was the oldest of eight children, the youngest was 2 years old, five boys and three girls. We had arrived at our new home on the corner of Beulah (now Gifford) and Mouse Mill roads, at 2 AM that morning, worn out from about 450 miles and two days of travel in almost constant snow conditions, on what were then primitive roads in Quebec, Vermont, New Hampshire and Massachusetts. An old 1940 Ford sedan carried my parents and six children while one brother age 12 and I rode in an old 1935 stake body truck with an uncle. All our possessions were covered with a canvas tarp.

By mid-afternoon of the next day, after moving our household and other items into the house, and eating a rudimentary meal ( there had not been time for our parents to get food nor know where shopping was available), with two of my brothers we trudged thru the snow to get familiar with our 12-acre land and new home. We discovered that field open lands were roughly about 6 acres with the rest roughly split by an ancient man made pond and forest lands. The forest carried an established woodlands stream that passed thru and fed the Pond area. A great homestead site surrounded by established old farmsteads and forested areas. A perfect setup for growing food crops: vegetables, poultry, pigs, dairy cows and calves. With opportunities for youngsters to get part time work on neighboring farms during the more busy farming times, other than a foreign language this was similar to the agricultural conditions from where we had come. Adapting to the language was not a problem, at times, aided by neighbors, some who were of French Canadian descent, and as was the custom, foreign languages were usually kept for a few generations. Portuguese, Polish, French, was fairly common, with the respectful understanding that English was official in mixed company to avoid suspicion that one was being derogatory in use of their native language. In late spring of that year I started work on the Bourque farm, about a mile away on Mouse Mill Road. I walked there at 5 AM, gathered about 30 cows from the night pasture, stanchioned them in their respective places in the barn  and fed them their apportioned hay and grain rations, Mr. Bourque and I would then hand milk 25 cows in various stage of gestation (determines milk output), the milk was paper filtered into 40 quart milk cans that were hand lifted into a refrigerated water cooler (full cans weighed about 100 Lbs.). After milking the cows were turned out, the barn cleaned, then breakfast, This was a “chore”, repeated about 4 PM and finished about 6PM when I returned home for supper. The in between hours were filled with “work” dependent on the seasons and needs. This was 7 day weeks with some hours off on Sundays between chores. My wages were $1.00 per day. The heavy work was done with a team of big work horses, a symbiotic farm relationship between man and animals, including pigs, chickens, cattle, barn cat, and guard dog. A life filled with learning and adaptation to regular and unpredictable conditions. Shared duties of women and men were dedication to the family’s welfare. The thousands of details learned from childhood during life progression were from observation, education, advice, co-operation and dedication. The farm employment ended my schooling (age 13) and started a 55 years steady work life, with USMC Korean War service from age 17 to 20, and continuous educational growth.

The pond was in great shape and would now be part of our life environment. Its eight feet wide earthworks dam, reinforced by massive stone bulwarks, an about seven-feet high by five-feet wide sluiceway, with depth set by two by six planking, and a stone overflow set at full pond level, all was a tested familiar construction of colonial era. It was used for irrigation water when needed, making ice in winter for summer use, grinding grain with power from a waterwheel in the sluiceway. The steel waterwheel shaft still existed with wheel remnants still attached. It rotated in greased oak bearings, a perfect solution for a slow turning, heavy shaft. This steel sizable shaft was stolen around 2010, sorrowfully it may have been sold for junk prices.  An old shed still had some ice chipping tools, I saved a serrated chipper from that shed. There were remnants of the ice storage shed where they would have used sawdust to insulate and keep ice from melting. The waterwheel may also have been used as power for sawmill planking. The whole set up was a perfect example of pre combustion engines power usage.

The pond, then likely unused for nearly a century for ice making and other uses that required water power had ceded about half (one acre) to active swampland, rife with natural cattails, conditions that had reduced to pond size from its likely full acre when it was in active use. Now a perfect environment for muskrats, a wildlife species we knew well from our Canadian environment. In the time’s custom they were trapped for pelt sales to manufacturers of muskrat cheap and stylish fur coats, durable, warm and well suited to the Canadian harsh winters, 30 degrees below zero with ample snow storms was a common and well accepted life cycle. We continued winter muskrat trapping when the pelts were in prime conditions, a properly skinned, salted and dressed pelt on a shaped shingle, sent to a place in Maine would bring a $1.50, received thru the mail, a sizable sum for a 13 year old farm boy.

The winter frozen pond was super for continuance of our Canadian pursuit of the gentle art of hockey. An activity shared with new friends from the Greenwood Park area. The goal posts were a couple of stones and the games were played with no protective gear. Sharing a few bruises with friend cements acquaintances. Friendships lasting to this time, with exceptions of the ones that are no longer with us but fondly remembered.

The 1949 pond conditions were a symbiotic arrangement, an environmental balance of: vegetation, aquatic and non- aquatic prey animals and fish, predatory black and other snakes, foxes, with visits by hawks and crows. All this surrounded by a complementary extensive town farming environment of  8 slaughterhouses, an ethnically mixed farming population, over 2000 in town cows, nearly 40,000 fowl, a thriving mink (fur industry) farm across from the present high school. No of dwellings was 2,771.

Mouse Mill drained an extensive meandering watershed of wetlands and forest, that gathered on the Goldstein Farm, flowed thru the Allard Farm then to Mouse mill pond, then via a long connection, flow continued under Beulah road, on the Siemensky farm to Bread and Cheese Stream, the combined flows, still on the Siemensky farm, fed Trout Pond off of Rt. 177, the outlet of which flowed via a stone lined trench (now interrupted and buried under 177) and a by-pass overflow under 177. A super place to enjoy the peace of an extensive pond surrounded by forest where we rested and sometimes swam on our meandering hunting trips. Follow of the stone lined trench past 177, leads to old ruins of what had been a water powered mill.

Waters from Mouse Mill and Trout ponds feed the Head Dam Pond area. Near Old County Rd. where its waters feed into the tidal Westport River. This formerly 40 Acre Pond, previously owned by Fall River is recipient of water flows from; Mouse mill pond and Trout Pond waters, that combine with flows from Forge Pond and Lake Noquochoke Dam.

Lake Noquochoke in Dartmouth spills its waters under route 6 and feed Forge pond (privately owned by Hoyt Mill) the two are still in damned up conditions. Hoyt’s has hookup connection to the Pond that can be used for emergency water in case of fire. Noquochoke is also connected to a pipe line that runs down Route 6 to provide emergency waters to Fall River, if needed, unlikely since the Fall River reservoir improvements over the course of decades of improvements. Forge overflow goes directly to the Head Dam, with a by-pass for past powering the ancient Mill, now Hoyt manufacturing (one of the oldest in the Country).

In summary, all of the upstream ponds watersheds, combined with the Bread and Cheese watershed gather waters up to the Freetown border. And, all waters combine with the tidal Westport River at the Head of Westport River, a location where many of Westport’s whaling ships hulls were built during the 1800’s.

Before its Dam Breaching 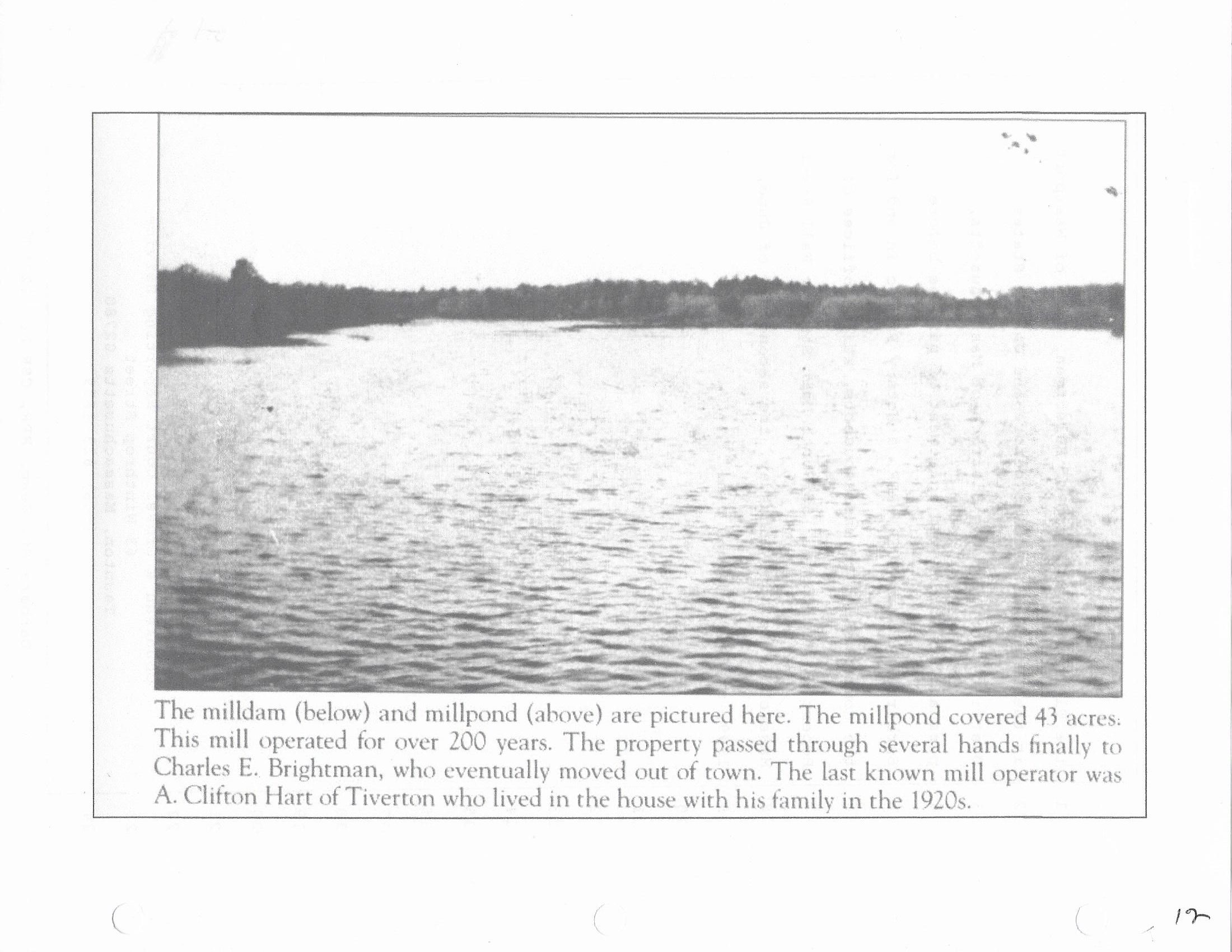 During the late 1950’s, 88’s damaging effects started complete evolutionary changes in Town; population demographics, Laws and regulations, administrative processes, Schooling, Farming, occupations, budgetary adjustments, business and service adaptations. AND, major noticeable changes in natural environments. Mouse Mill pond was the canary in the mine, changes here were a sample of myriad adverse effects of 88’s march thru 12 miles of Town’s mostly undeveloped lands. Changing neighborhoods and slicing farms to new inoperable conditions, starting availability of cheap house lots in a rush of subdivisions, peaking about 1975. Detailed in a Power Point presentation that I assembled many years ago, and in a book “A History of Westport in the Twentieth Century, How Events of 1958 Triggered Serial Official Actions that Determined Westport’s 2018 Conditions”

As an interesting aside, Andrew Ferry of the Gifford Rd. Farm found a long tunnel associated with the Pond that was apparently used for supply of water to a now vanished Mill. An addition that I was not aware of.

Noquochoke and Forge are now suffering from centuries of unavoidable siltation, Forge nearly fully, evidenced by Aquatic vegetation growing above the water surface during summer months. 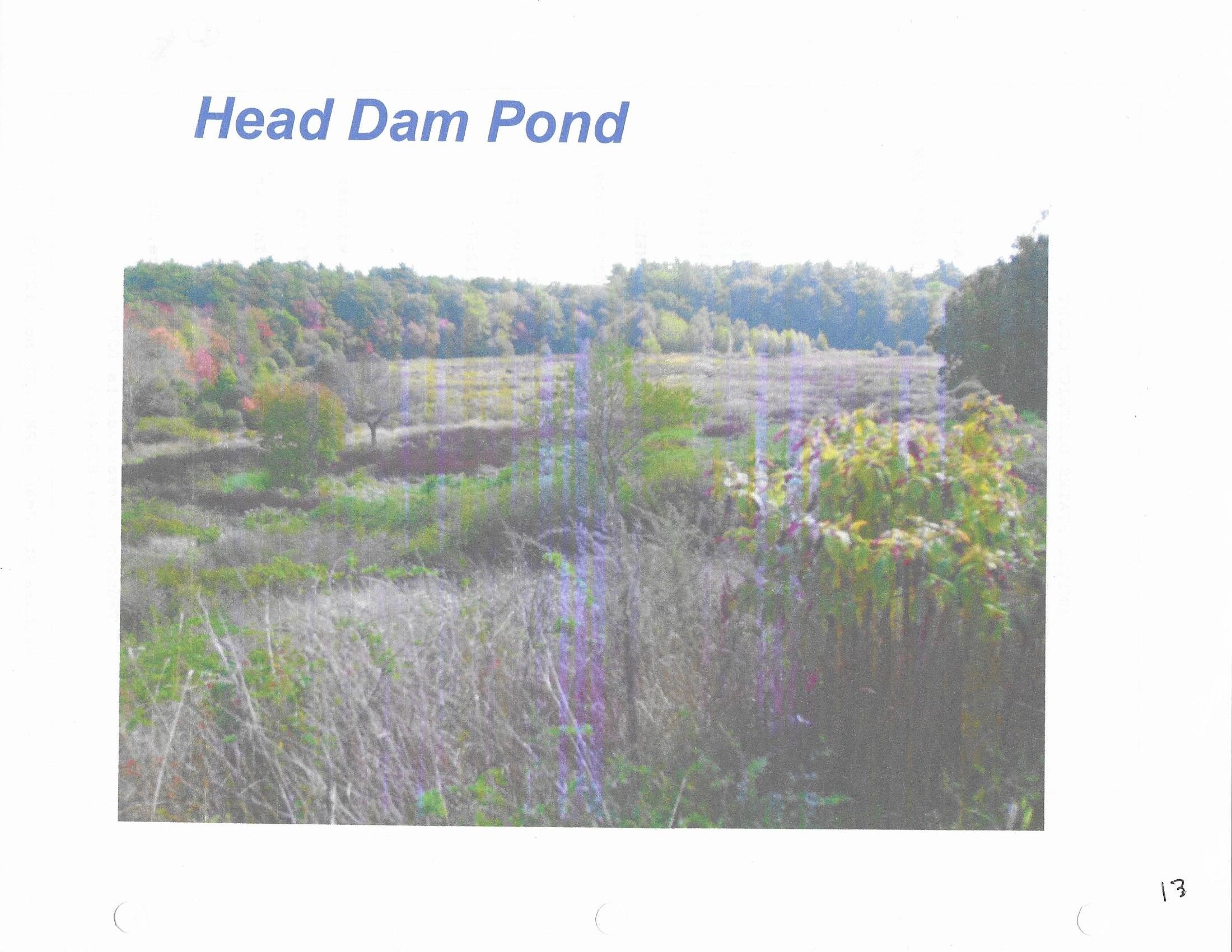 At age 85 it is sad to recollect the loss of the past symbiotic marriage of farms and ponds. A town character combination that is unknown to most of Westport’s population.

This entry was posted in Local history articles, Uncategorized.