Home → Blog → Westport’s Gilded Age: The Rise and Fall of the Charlton Estate

Westport’s Gilded Age: The Rise and Fall of the Charlton Estate 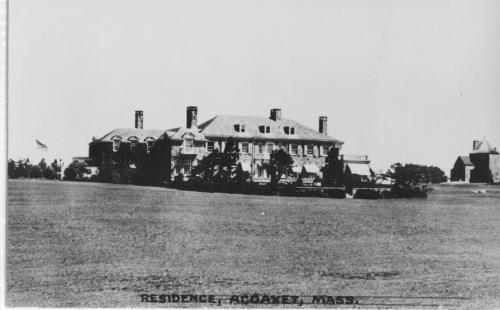 Pond Meadow, the Gatsby-esque mansion in Acoaxet next to the Nubble, is truly one of the most magnificent pieces of architecture Westport has to offer. Surviving hurricanes for the past 101 years, the estate has become a town landmark due to not only its extravagance but the incredible view of the Atlantic from its grounds. While the outside of the manor is certainly splendid, it’s the inside we now know more about. Going through a donation from 2008, it appears that we have a fairly complete photographic collection of the house during its prime in the form of 3D stereographic cards, in color no less.

Before discussing the mansion in any detail, we should first talk about the man who built it. Earle Perry Charlton was a self-made millionaire thanks to 5 and Dimes, which he started in Fall River and expanded throughout North America. Other locations included Los Angeles, Salt Lake City, and Ottawa. He would eventually merge into the Woolworth Company, taking an executive role as Vice President, and a check for $6.5 million dollars in 1912. This, more or less, gave him money to burn – though most of it would go to various hospitals and other forms of philanthropy, as was the standard set during the Gilded Age. However, just because a large portion went towards social causes does not mean he donated everything, as can be seen with his near iconic estate.

Construction on Pond Meadow finished in 1918, and to say it is magnificent is far beyond an understatement. As you will see below, Charlton was incredibly liberal with his wealth – sadly not included in the pictures are his eight-car garage and bowling alley in the basement. The mansion has several libraries, offices, smoking rooms, and had a large conservatory and several outdoor gardens in the back. This is without mentioning the décor, which simply beyond compare; a personal favorite has to be the wall mural on one of the staircases, so large it had to be printed on two separate stereographic cards. Many of the windows appear to have silk curtains, and there is one especially pink room which is truly the definition of the phrase “gaudy”. Every frame – picture or mirror – appears to be golden, and even the ashtrays have a shine to them. This is all without mentioning the astounding woodwork throughout the house; from the dressers to the tables to even the walls of the library. While each room has its own character, the house as a whole abides by a single phrase – luxury.

The Staircase in Question 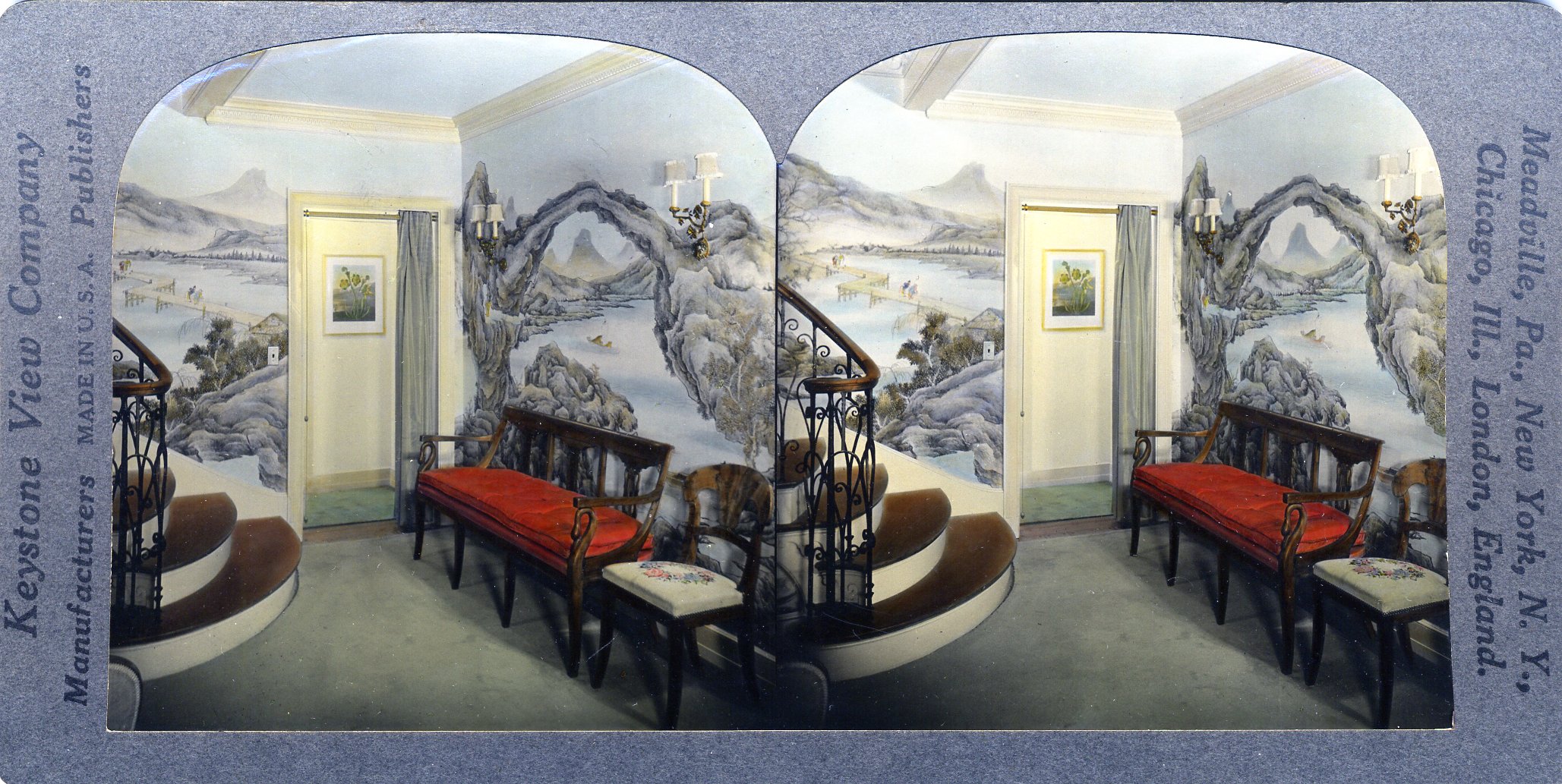 E. P. Charlton would die in 1930, leaving his estates (the others were in Maine, Pennsylvania, and Palm Beach) to his children, including his daughter who would be Mrs. James Charlton Masson. In the 1970’s she was overwhelmed by not only maintaining the properties, but paying the taxes as well – Pond Meadow was assessed to be $253,800 in 1976, forcing her to pay some $41,000 in taxes. That was her final year with the property, as in June 1977 it would be sold to New Bedford Attorney Robert Xifaras for $500,000 (over $2,000,000 in today’s money) in a fiercely fought battle with the likes of Liberace, The Grateful Dead, and apparently Elvis – who would die just two months later. Xifaras hoped to develop the land into a condominium block, with the New Bedford Standard Times reporting that he planned to build “no more than 10 to 12 homes and a tennis court on the available land” – a plan which we all know went swimmingly. However, while Xifaras did get the property, he didn’t get anything inside.

The Pond Meadow auction broke the record for the largest auction in Westport history, and probably still holds it to this day. Lasting over two days, selling at an average of 90 items per hour, the auction blew right past the expectation of bringing in $500,000. Anyone looking at the auction booklet both then and now gets a front-row seat into the, to quote the Fall River Herald, “eclectic” tastes of E.P. Charlton. Starting with a hair dryer, the auction included items such as German porcelain fruit plates, a camel backed sofa, a mounted sailfish, and obviously the greatest prize of all, a Japanese bronze penguin. As for things people would actually want, there was very little for Westporters – thousands took free tours of the estate before the auction began, but few ended up paying the $5 entry fee. Most of those who did also went home empty-handed, outbid by the French and Italian collectors who crossed the Atlantic for this unique opportunity; the Metro newspaper opened their article in the middle of the auction, specifically as a Louis XV-style potty chair that started at $50 was finally sold at $150. Other notable items included a 417 piece set of Reed and Barton Francis I silverware which went for double its estimate, coming in at $13,000, signed works of Charles Dickens, and the most expensive item was the Chinese coromandel screen, which was sold for $16,000 – today’s $67,791.16. However, in our story, the most important item was Lot 473: a Stereographic Library.

Newspaper Photograph of the Auction

Caption: Sitting on chairs but bidding on stools is some of the crowd at the Charlton Estate auction in Westport yesterday. 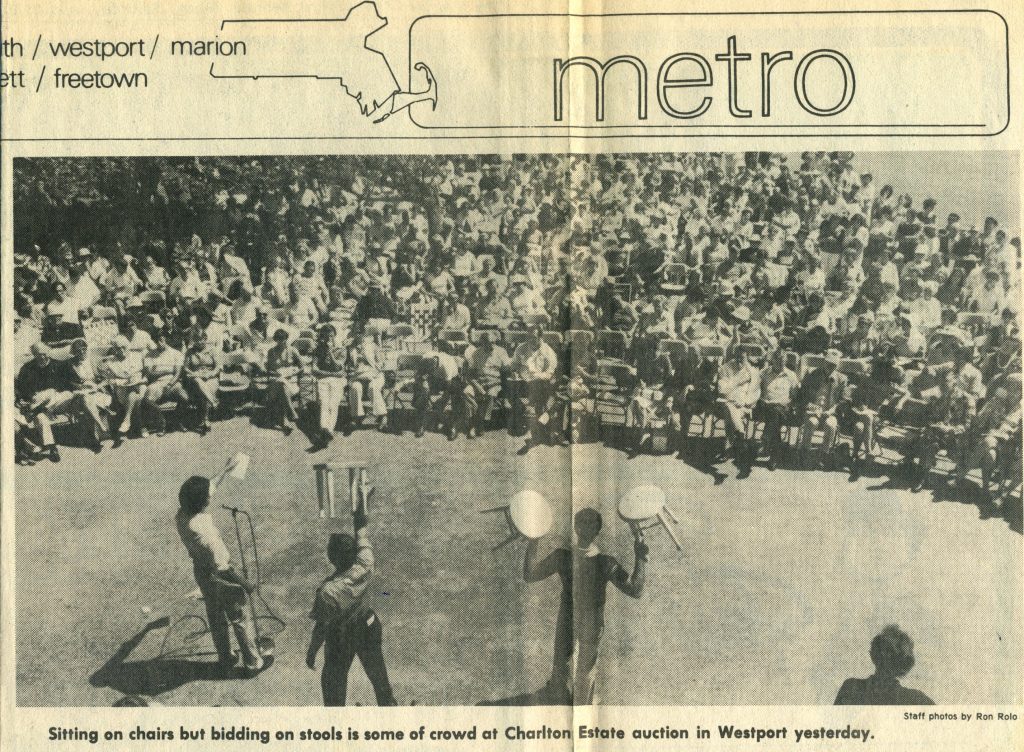 And thus, we come full circle; as this library must have been what we see in front of us today. These stereographic cards were printed sometime during the Roaring Twenties when the Keystone View Company became the premiere Viewfinder company after gaining a monopoly on WW1 cards. Although the cards are obviously from the Keystone View Company, the ones of Pond Meadow are missing many of their tell-tale signatures that can be found on commercial cards – most importantly these cards do not have any indication of belonging to a particular series, and they lack any historic blurbs on the back. Therefore, there seems to only be one sound conclusion, one I believe you’ll agree sounds like the man who would spend a small fortune on a Japanese bronze penguin.

Right as Pond Meadow was completed, The Great War ended, and therefore Keystone gets massively wealthy. Could it be that Charlton, in love with his new estate, invited the Keystone View Company, at that point the most famous stereograph company in to make a collection of cards about his house? Again, judging by the other design choices made throughout the house, this isn’t a great stretch. It seems likely that the cards were never sold commercially and remained in Charlton’s private collection until the auction. While the origins of the cards are not known for sure, they certainly do give a grand look into one of Westport’s greatest landmarks during its prime.

For those curious, although Xifaras’ plan failed, the Pond Meadow site is today a condominium. While the many great gardens and even the whole conservatory are gone, the house itself is now a rentable vacation site for both long and short-term stays. While much of the property and the surroundings seem to have changed, the core essence has stayed the same; this beautiful, historic mansion and monument to extravagance still overlooks the Atlantic and will continue to amaze for generations to come.

This entry was posted in Collection spotlight, Twentieth Century.