Home → Blog → Voices from the Past

Voices from the Past

Voices, some of which have not been heard for many decades, will once again come to life! A project to preserve and provide access to interviews conducted in 1976 is moving forward with assistance from a Community Preservation Act grant.

During Westport’s Bicentennial celebrations in 1976, oral histories were obtained from numerous residents. Many of the interviewees were in their nineties, and shared recollections of growing up in late 19th century Westport. For example, Alice Blossom, aged 93, recalled catching a train at North Westport to camp meetings at Beulah Grove. Everett Coggeshall, also in his nineties and considered at that time to be the oldest living plumber in the US recollects beginning his career in Acoaxet in 1897. Other interviewees discuss wartime activities, life during the Great Depression, the weather and town government. Hopes and fears for the future of Westport are frequently expressed.

Some of the stories may, perhaps, have been embellished, such as Everett Coggeshall’s claim that he “saw a man walk from the end of Horseneck over to Cuttyhunk on the ice and back again. … the ice was three or four foot thick.“

However, taken as a whole, this collection provides a clear glimpse of the unwritten minutiae of everyday life. The spoken word adds new dimensions to our understanding of the past. The informality of these recordings imbues each interview with personality, candor and humor.  In Everett Coggeshall’s own words “Talking is the best thing I do.”

Unfortunately, audio cassette tapes have a very limited life expectancy of about 30 years. As this collection reaches its 43rd anniversary, time is running out to capture the recordings and preserve them for posterity by transfer to a digital format. This project will create an audio master file (WAV file) and an audio access file (MP3).  We hope to have the recordings available for listening by spring-time 2019!

Westport’s oral history collection is currently available on audio cassette tapes and as a transcript at the Westport Public Library and at the Westport Historical Society. Transcripts can also be read here http://wpthistory.org/oral-histories/. 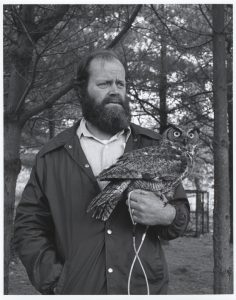 “Right now I’m starting a new venture in my life. I’m going to turn around 180 degrees and take a big step forward. I’m building a log cabin in the woods and I’m not going to have any electricity, no telephone. I’m going to try to do it myself, and if I succeed in some of these areas, I can say, ‘Look what can be done.’” (Excerpt from Bicentennial interview, November 1976) 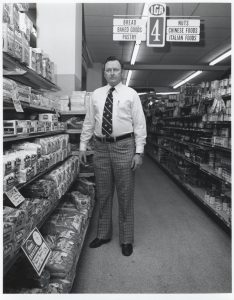 “I had a hardware business, and when the mill outlets came into being, the hardware business took quite a decline, and I thought it over and thought, ‘Why don’t I stimulate some business and bring people in by putting in some groceries?’ So we put in some groceries, mixed in with the hardware, made it more than a general store, and as time went along, the tail wagged the dog and we became a grocery store, and the hardware went into the background until now, we only have impulse items in the way of traditional hardware.” (Excerpt from Bicentennial interview, August, 1975) 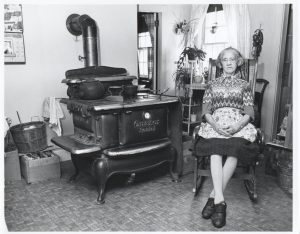 “Well, living off the road like that, it was too far for me to go out, and it was too far for children to come in, so I played with the animals mostly.  I’ve had woodchucks, squirrels, and chipmunks.  I had a baby weasel that liked to go around and hide things under everything.  He was happy and contented in the house and didn’t go out.” (Excerpt from Bicentennial interview, October 1975)

The following individuals were interviewed in 1976: