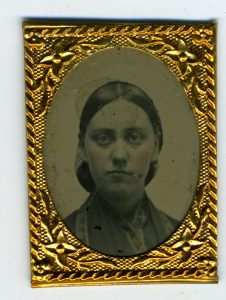 Westport’s Ruby Devol Finch (1804 – 1866) is considered to be “one of the most uniquely creative female American folk artists of her time” (Donald R. Walters, “Ruby Devol Finch, Recent Discoveries,” Antiques and Fine Art Magazine 2012). However, with only 15 known works, it is not surprising that she remains somewhat obscure. Yet her art is highly prized and can be found in the collections of Colonial Williamsburg and the American Folk Art Museum, NY. Recently, with the help of a few generous donors, one of her works has found its way back home to Westport. Her profile portrait of Ann Potter c. 1830 joins the “Little Gem” hand-tinted ferrotype of the artist in the Historical Society’s collection. 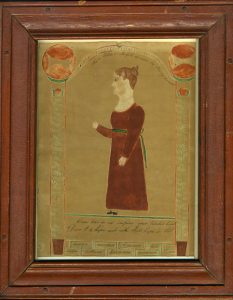 Portrait of Ann Potter ca. 1830. Signed: “Ann Potter’s Profile drawn by Ruby Devol”
Watercolor, gouache and ink on paper
The inscription reads: “Can love for me inspire your tender breast/Dare I to hope and with that hope be blest.”
Ann Potter was born in Westport May 21, 1809 (daughter of Joshua and Elizabeth Potter). She married James Macomber on November 30, 1828. She died May 20, 1844.

Ruby Devol Finch came out of anonymity in 1978, with an extensive article by Donald Walters, the former curator at Colonial Williamsburg. In the 2012 issue of Antiques and Fine Art Magazine she received further attention as a result of new discoveries of her works. This article outlines her genealogy pieced together by local antiquarians Jim and Barbara Faria and also includes images of all 15 known works.

Her watercolor portraits satisfy all requirements of the folk art genre. Folk artists were generally self-taught, creating “naïve” or “primitive” style art far from the urban centers and reflecting the social setting of a rural community. Her portraits, almost always in profile, are characterized by a sharply defined, almost mathematical precision, with an overall flatness. She often included decorative flourishes such as the arched tablet border with columns and vines seen in the portrait of Ann Potter. Perspective, brushwork, and proportion are abandoned in favor of a stylized illustrative depiction that nonetheless conveys the “truthfulness” and individual character of each subject. Most striking is the detail of clothing, furnishings, architecture and the use of color throughout. Her male subjects wear bright blue uniforms, patterned stockings, dotted waistcoats, and her female subjects are dressed in yellow, red and green. Peculiar artistic traits such as miniature shoes and “cauliflower ears” characterize her style.

It was rare that women practiced as professional artists in the early 19th century, however it seems that Ruby Devol Finch, who grew up on a farm on Sodom Road, was accepted as a community artist, creating portraits of friends and neighbors such as Elijah and Hannah Robinson, Abner and Betty Davis, Tillinghast Tripp, Susannah Tripp, and Sally Allen. Many of her works seem to commemorate life events such as marriage or death — moments in time that transcend the particular individual.

Her profile of Ann Potter may, at first glance, be a simple portrait of one individual, but it is also our link to the community of the 1830s and to an extraordinary artist – a rare example of a female folk artist whose world has been captured in 15 small works.

The Westport Historical Society gratefully acknowledges the donors who made this acquisition possible, with special thanks to Burney Gifford Fine Arts and Americana, Steven Fletcher, Charles and Linda Findlay, Bernard Taradash 2000 Trust, and an anonymous donor.