The daybooks of Doctor Ely and Doctor James Handy 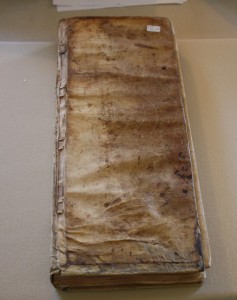 We are very fortunate to have in our collection the daybooks of Ely Handy (1763-1812) and his son James Handy (1792-1868), both of whom practiced medicine in Westport MA. The books which date from 1790 – 1830, record the names of those who were treated and provide a fascinating glimpse into 19th century medicine.

You can view the index of names of patients 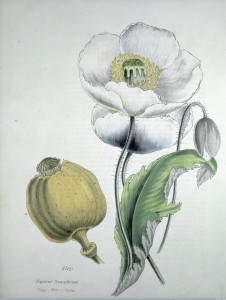 The treatments cost anywhere from $.25 for a simple mixtures like Jalap Calomel to $3 for the delivery of a child. The doctors made house calls. Early 19th century medicine did little to cure disease. Instead, drugs such as opium simply alleviated or masked symptoms.  Doctors also sought to balance the “humors” — blood, phlegm, yellow bile and black bile. Many of the drugs prescribed by Doctor Handy induced sweating, vomiting, and bleeding in an attempt to cleanse the body. Opium was a common cure-all.

This is a page from Dr. Handy’s account book. Can you decipher some of the drugs? Look for: 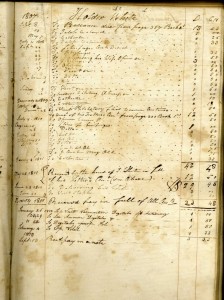 “Spirits of Vitriol” — sulfuric acid mixed with alcohol to create ether, a painkiller; vitriol itself could also be used to burn away sores.

“Spanish fly” — a type of beetle. When crushed up, the chemicals in the fly cause the skin to blister up, which was considered a way to decrease humors and stimulate the muscles in order to fight disease. 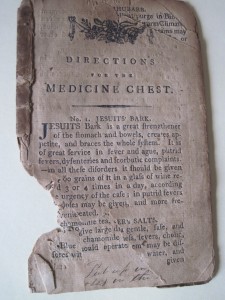 Dr. Handy also prescribed natural remedies. One of the books that he consulted was The Medicine Chest, which included the following:

Snake-Root, a very valuable medicine, in the weak and low condition, attendant on the latter stages of Fevers.

Chamomile Flowers for a weak stomach; make a tea of them by steeping a handful of them in a quart of boiling water and drink of it freely.

Essence of Peppermint relieves colicky and other pains in the bowels – cures seasickness – stops vomiting, and performs many other valuable things.

Rhubarb, an excellent purge and all the Fluxes of warm Climate.