Home → Blog → The Curious Case of the Concealed Shoes

The Curious Case of the Concealed Shoes

Have you ever found old shoes hidden in odd locations in your house? If so, your discovery may be evidence of a mysterious worldwide superstitious practice.  A recent donation of a collection of ancient shoes focused our attention on this strange practice of concealing shoes in buildings. 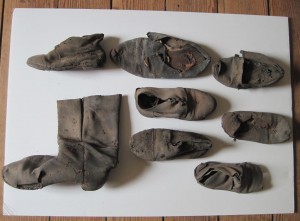 This collection of shoes was discovered in a secret room hidden behind a fireplace in an old house at the Head of Westport. During chimney repairs, a hole was made in the fireplace, at which point approximately 20 individual shoes were discovered scattered inside a large void behind the chimney mass. These empty spaces behind a chimney weren’t uncommon and generally had little purpose aside from being storage or just space behind the central chimney mass. The collection consisted of well-worn children’s shoes. 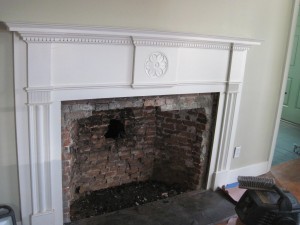 Our research into this concealed shoe collection led us to a database of over 2000 discoveries, compiled by June Swann, at Northampton Museum, UK. The database reveals a very diverse range of locations where shoes are found, not just the locations within the buildings, but also the type of buildings. Not only have they have been found in cottages and farms, but also mansions and chapels indicating that superstitious beliefs weren’t limited to any particular demographic.

Evidence shows that shoes have been concealed in homes dating from the Middle Ages. Theories about this practice abound from warding off evil to bestowing overall good luck. Some even consider the possibility of the hidden shoes as a fertility charm as several concealments were found embedded in the walls of the master bedroom in the home. Theories mostly focus on superstitious power of shoes to repel evil spirits, a belief that continued into the early 20th century, spreading from Britain and Europe to Australia and America via Colonial New England. Concealed shoes have even been found in China. Shoes are most often found near areas leading into the house; most often chimneys, but also doors and windows. The shoes are well worn, being the only garment to take the shape or “essence” of the wearer, giving evidence to the idea that perhaps the practice was meant to trick evil spirits entering the house to notice the shoes and not the inhabitants of the house.

Shoes have long had superstitions and good luck associated with them, even horses’ shoes are considered good luck. With the long list of superstitions, it’s no wonder people might have believed burying them within their homes would blanket good luck over the inhabitants or repel evil from the home. However, shoes aren’t the only items to have been found secreted in buildings. Researchers have looked at other items including pieces of clothing, “witch” bottles and animal bones, some speculating on a magical or ritual purpose. We may never know why people hid shoes and other items within their homes however the number of discoveries and the deliberate placement of these items seem to indicate a special purpose. We would love to hear of any local concealed shoe discoveries!