It doesn’t take long for one to realize that Buzzard’s Bay coastal communities are a special place; pristine, tranquil places filled with charm and nostalgia. The sun-bleached capes and manicured captain’s homes that rim these country lanes remind us of a time when the sea was our connection to the World, and our forefather’s fortitude and ingenuity helped shape this region’s chapter in history.

In the coming segments, we plan to illuminate Westport shipbuilding in the whaling era, and discuss who, what, when and speculate on how the community became a major influence on the industry.

As a result of this effort, we hope to uncover more substantial information on the subject and share it with our audience.

The Massachusetts south coast in the 18th Century was dotted with numerous farming and fishing communities that drew their subsistence from the land and sea. From Tiverton to Wareham, determined people eked out a meager existence trading on the riches in their backyards. The advent of the whale oil business changed the focus of their lives and they adapted to its challenge in astonishing ways.

Like Dartmouth, Fairhaven, Rochester and Sippican to its east, Westport’s proximity to the sea, its harbors, rivers along with vast natural resources including abundant forests, iron ore and streams that could power mills and foundries made the area a perfect location for sea-going industries. Trading on abundant waterpower, sawmills, gristmills, forges and foundries translated the area’s vast natural resources into products and commodities for trade and industry. The early inhabitants and their reliance on the sea, along with their boat building abilities, made this area a logical hub for 18th & 19th Century boat and ship building commerce. Boat building was a natural extension of who they were, as well as a necessity of life.

Numerous primitive boat-building operations were scattered across the Westport landscape from the Head of Westport to Westport Harbor creating yawls, cats, sloops, scows and schooners. These boats traversed the rivers, bays and distant harbors on fishing voyages, and to conduct trade and regional commerce.

With the emergence of the whaling era, in the mid-18th Century, industrious leaders throughout the region recognized the great opportunity the whale oil business offered. In Westport, Isaac Cory, Paul Cuffe, Tillinghast and Caleb Tripp, William Davis, John Avery Parker, William Rotch and many others positioned themselves to take full advantage of the opportunity.

Between 1790 and 1860, with its fifty-four whaling vessels, Westport became the 8th largest whaling port, due in a large part to the efforts of these men. 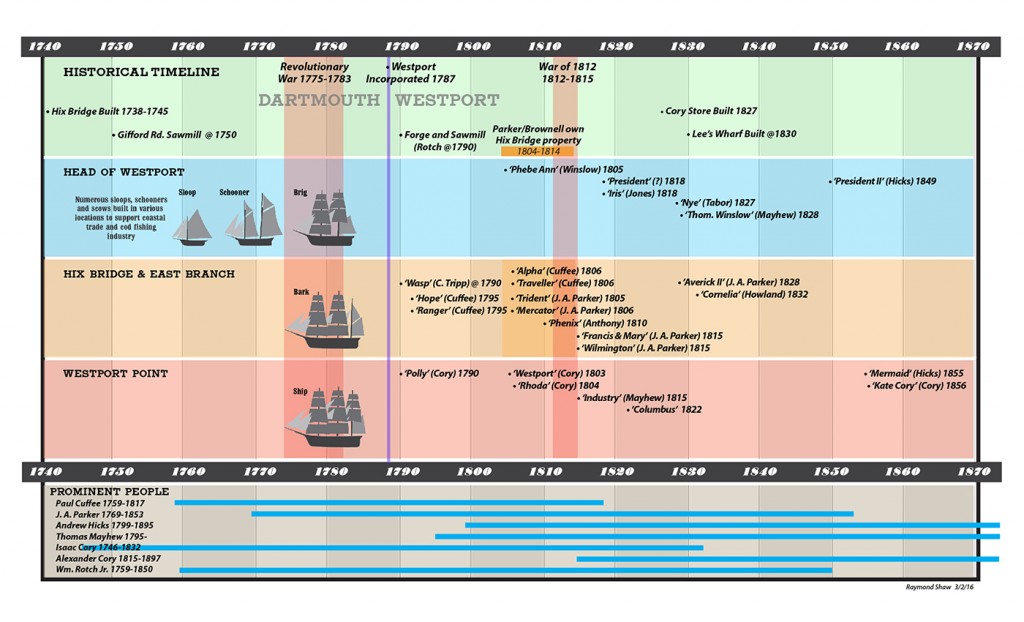 In stark contrast to today’s tranquil existence, whaling-era Westport was a vibrant, bustling community with craftsmen, tradesmen and businessmen striving to keep pace with the evolving industry. Merchants and port operators worked in concert to prepare ships for voyage and process incoming ships and their cargo. Daily needs of families of masters, seamen and shipbuilders added to the din of commerce.

Prior to their focus on whaling ships, Westport builders were actively building sloops and schooners for the cod fishing trade, scows for river commerce, and assorted smaller vessels to support the whaling business in New Bedford and Nantucket.

At The Point there were numerous businesses that derived benefit from the region’s ocean-going trade. While the Cory’s and others were building vessels in their backyards, John Sowle built whaleboats for whaling ships both here and southern New England. The Howland brother’s three cooper shops turned-out thousands of whale oil casks required to carry whale oil. Simeon Macomber’s blacksmith shop created the harpoons and other tools needed by whalers, and forged iron and other critical parts for the ships.

The business of shipbuilding and whaling in the era was a ‘community’ affair with no single investor taking full responsibility for a vessel or voyage. The tenuous nature of the whaling business compelled pools of shareholders to spread the risks and rewards in direct relation to their investments. From a tradesman’s perspective, the process of shipbuilding was conducted by many shipbuilding companies on a voucher system wherein the trades and craftsmen were paid upon the eventual launch of a finished vessel. Roving teams of shipbuilding specialists moved from building site to building site to share their expertise and keep the industry humming.

One of the earliest and most prosperous ships was said to be the sloop ‘Union’ that sailed from Westport Point around 1775. By around the 1790, there was a concerted effort by builders to focus on building purpose-built vessels that could stand the rigors of long distance whaling voyages. Ships ranging in size from around 75 feet and 130 ton gaff rigged schooners that worked the Atlantic fishing grounds to 120+ foot and 400 ton three-masted ship-rigged fishing factories that hunted the Pacific, Indian Ocean and the Arctic are documented to have been built on these shores.

Most of the successful Westport-built whalers were 80 to 100 feet in length and between 200 and 300 ton capacity. These larger barks and ships were designed to endure a two to three year voyage with crews of twenty-five or more.

In the following post, we will discuss known shipbuilding locations in Westport.