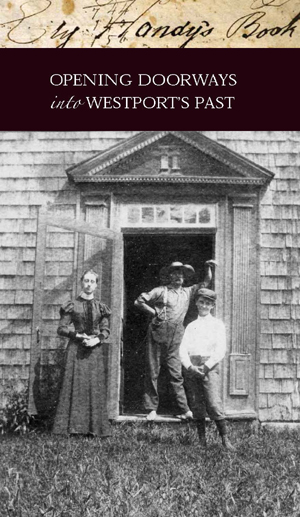 The Cadman-White-Handy House — known today as the “Handy House” — provides a uniquely compelling and inspirational doorway into Westport’s past. Beginning with construction of the eastern section of the house by George Cadman in c.1710, the property has been part of the human and historical fabric of the area since the arrival of the earliest European settlers. A major addition was constructed between 1730 and 1750, around the time of George Washington’s birth, and residents of the house watched young Westport lads march past in the 1770s on their way to enlist in the Continental Army.

The Handy House illustrates 300 years of architectural evolution. A visitor to the house walks through centuries of architectural history and can view the distinct First Period colonial lines and details of the east wing and the Georgian style of the mid section. In 1825, Dr. James Handy added rooms on the western end that are Federal in style. The house remains one of the most significant extant examples of 18th-century architecture in the entire south-coast region of Massachusetts. In recognition of its special significance – and of its pristine “museum quality” – the Handy House was placed on the National Register of Historic Places in 1994.

This home is at once a touchstone of ancient memories and a place where children and adults now, and in the future, will be able to learn about the important contributions of Westporters on the local, national and international stage. One example of this can be found in the meticulous accounts that Drs. Eli and James Handy kept of patient expenses. In the early 1800s, a birthing confinement was $3.00, treatment of a broken limb was $2.00, sore teeth were pulled for 18 cents each and “house calls” (house calls!) were 50 cents — unless the house in question lay across the East Branch of the Westport River, necessitating a ferry ride for which a few extra pennies were added to the bill.

The Westport Historical Society is committed to preserving and protecting the Handy House and the 25 acres on which it is located and facilitating its on-going use and enjoyment by the community. Even the process of stabilization and rehabilitation of the building will encourage young and old alike to learn about local history through direct observation of how an authentic 18th-century building was put together. Archaeological research in which the public will participate will provide exciting glimpses into daily life of Westport’s past. The Handy House, together with the nearby Town Farm and Oscar Palmer Farm, will form a cultural hub around which the community and regional tourists can reconnect with our colorful heritage.

Home to some of Westport’s earliest settlers, visited on numerous occasions by the noted late 18th and early 19th century Westport figure Captain Paul Cuffe and occupied by two of the town’s earliest physicians, the Handy House stands today as an icon of Westport’s past. And it symbolizes what the future of Westport might look like – a percolation of time in which the past is always present. For how can we know ourselves — how can we create a rich and vibrant future — without knowing from whence we came.

Under the stewardship of the Westport Historical Society, the Handy House property, the beautiful building and the lovely surroundings, will be a community resource attractive and available to people of all ages and interests. The Handy House is destined to become the public’s place with workshops and activities for a variety of interests: attractions and educational opportunities for children, cultural offerings in the arts and music, gardens, outdoor activities, opportunities for small, private celebrations and even larger ones and whatever viable opportunities can engage Westporters and tourists in the sense of community and the sense of place that this historic treasure provides.

A second, longer-term goal of the Handy House project is to move the headquarters of the Historical Society to the site by locating the offices and the Society’s historic collection in an appropriate and carefully designed separate small building. After much deliberation and consultation, the Society decided that this would be the best way to protect the historic fabric of the Handy House while also fulfilling the facility needs of the Society and the community

We hope you will join with your neighbors who have already committed through Community Preservation funding, private contributions and service to protecting, preserving and honoring the Cadman-White-Handy site. As we proceed towards making this special place open and available to the public, we are confident that many in the community will help us through donation of their time and expertise, creative ideas, and much needed financial support. Thank you!

This entry was posted in Handy House.