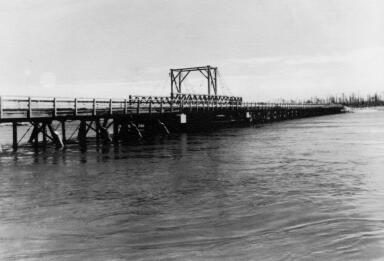 Westport Point Bridge was completed in 1894 at a cost of $20,000. The draw section of the bridge rested on a stone pier and rotated to “open” for vessels traveling the East Branch of the Westport River. Four-to-six men walked in a circle pushing a long wooden pole attached to a metal key to operate the gear system which swung the “draw” span open. Al Lees replaced his father, Al Lees, Sr. as drawtender in 1960, overseeing the last opening of the old bridge in 1962. Demolition of the 1894 bridge was completed in 1963.